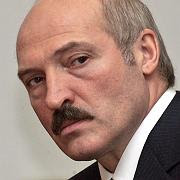 Alexander Lukashenko, the corrupt Communist dictator of Belarus, has once again rigged an election. And once again he ordered police and soldiers to brutally beat up the leader of the opposition and hundreds of those who had gathered to protest the farce.

As an American who is a little familiar with Lukashenko's police state (I've been in the country 10 times during his rule), I bemoan the ongoing injustice, the religious repression and the gross inefficiency which has marked his government.

And I, along with freedom-loving people across the globe, pray for his quick removal from office.
Posted by DH at 9:59 AM