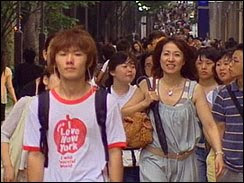 With a rapidly aging population with fewer and fewer young people to carry on, Japan represents one of the worst cases of "birth dearth" in the world.

Close observers had known trouble was coming but the crisis hit harder and faster than expected. The 2005 census, for instance, showed that Japan's number of deaths exceeded that of births for the first time. And it's not getting any better.

Here from The Economist:

Since the mid-1970s, when it became clear that the number of births was resolutely declining, Japanese governments have made efforts to encourage people to have more babies. But for all that they have increased child benefits and provided day-care centres in the past 30 years, the birth rate has remained stubbornly low. One reason is that in Japan, unlike in the West, marriage is still more or less a prerequisite for having children. Only 2% of births take place out of wedlock. And weddings cost a lot of money. The more elaborate sort may involve renting a chocolate-box “church” and hiring or buying at least three bridal outfits. The average cost of a Japanese wedding is about ¥3.2m ($40,000).

Having gone to all that trouble, married couples do, in fact, have an average of slightly more than two children, just above what is needed for births to exceed deaths. The trouble is that fewer and fewer people get married. Women wait ever longer and increasingly do not bother at all. According to the NIPSSR, six out of ten women in their mid- to late 20s, which used to be the peak child-bearing age, are still unwed. In 1970 the figure was two out of ten. And almost half the men between 30 and 34 were unmarried in 2005, more than three times as many as 30 years ago...

One of Japan’s most prominent sociologists, Masahiro Yamada of Chuo University, thinks that most young Japanese women still want to be housewives, but are struggling to find a breadwinner who earns enough to support them. He points out that half the young people of prime marrying age -- 20-34 -- still live with their parents. In the 1990s he coined the term “parasite singles” to describe them. They seemed to be getting a good deal, saving money on rent and spending it on foreign travel and luxury goods instead. If they wanted privacy, they could always go to one of Japan’s ubiquitous love hotels...

Florian Coulmas of the German Institute for Japanese Studies in Tokyo, who has made a special study of population issues in Japan, has no easy explanations for the low birth rate, but describes it as the “bitter fruit of success” in Japanese demography. “A growing percentage of the population, both married and never married, without children has no vested interest in society, with hitherto unknown consequences for its self-image and sense of purpose,” he writes.
Posted by DH at 8:46 AM