Scalia: "The Constitution Says What It Says and It Doesn't Say Anything More" 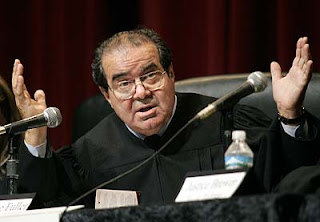 U.S. Supreme Court Justice Antonin Scalia slammed the modern U.S. judiciary and the high court for using the idea of a "living constitution" to invent new rules and meanings that have led to a "right" to abortion and decriminalized homosexual conduct.

Scalia made his remarks last Friday during a University of Richmond luncheon lecture entitled "Do Words Matter?" The event was covered both by the Associated Press.

"The Constitution says what it says and it doesn't say anything more," said Scalia to an audience of 250 people, most of them legal professionals and academics.

The 74-year-old jurist, appointed to the high court by President Ronald Reagan in 1986, warned that government by judges is inevitable when the original meaning of legal language in laws and constitutions is not respected. This attitude, he said, allows "five out of nine hotshot lawyers to run the country."

"Under the guise of interpreting the Constitution and under the banner of a living Constitution, judges, especially those on the Supreme Court, now wield an enormous amount of political power," continued Scalia, "because they don't just apply the rules that have been written, they create new rules."

Scalia pointed out that the high court distorted the meaning of "due process" (referring to legal procedure) in the 14th Amendment to invent new rights under a "made up" concept of "substantial due process." That has allowed the 14th Amendment to become the gateway to legal abortion and other behaviors, which the constitutional authors never intended and viewed as criminal.

"The due process clause has been distorted so it's no longer a guarantee of process but a guarantee of liberty," Scalia expounded. "But some of the liberties the Supreme Court has found to be protected by that word - liberty - nobody thought constituted a liberty when the 14th Amendment was adopted. Homosexual sodomy? It was criminal in all the states. Abortion? It was criminal in all the states."

He also commented on the modern confirmation process of Supreme Court justices, saying it was akin to a "mini-constitutional convention" because Senators are fighting about how a justice will interpret words.

"The way to change the Constitution is through amendments approved by the people, not by judges altering the meaning of its words," he added...

(LifeSiteNews.com story, published in Catholic Online)
Posted by DH at 9:38 AM