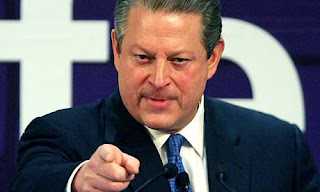 While speaking at an environmental conference in Athens, Greece (it's the only kind of gig he can get nowadays) former Vice-President of the United States and the fellow who came within a few hanging chads of becoming the nation's Commander in Chief, Al Gore surprised many when he completely reversed himself on the issue of ethanol being an important eco-friendly tool.

Gore now says (just weeks before the tax credits for ethanol are up for renewal) that corn-based ethanol isn't the way to go after all. "It is not a good policy to have these massive subsidies for first generation ethanol," said Gore. "First generation ethanol I think was a mistake. The energy conversion ratios are at best very small."

But wait. Didn't Al Gore once loudly trumpet ethanol as an energy-efficient fuel, one that government desperately needed to get behind? Wasn't he once standing arm in arm with those lobbyists he now denounces?

But, in a shockingly candid moment (here's what happens when you don't have handlers and a teleprompter), Gore admitted his former position was not based on solid scientific evidence. And it didn't represent the kind of careful, responsible, disinterested decision one hopes for in leadership.

"One of the reasons I made that mistake is that I paid particular attention to the farmers in my home state of Tennessee, and I had a certain fondness for the farmers in the state of Iowa because I was about to run for president."

In other words, Al Gore's ethanol support was a matter of the most petty political pandering. Principles, facts and the good of the people be damned -- Gore was looking for votes! And he was willing to say anything in order to get them.

And this guy nearly became our President?

Thank the Lord for those hanging chads.
Posted by DH at 9:34 AM