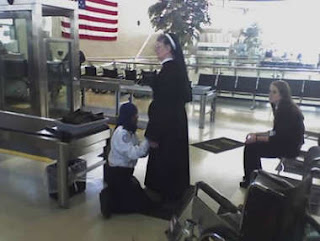 This photo, showing a Muslim TSA agent in religious garb conducting one of the new, humiliatingly intrusive airport searches on a Catholic nun, is from the Drudge Report.

His caption? "The Terrorists Have Won."

One can understand Matt Drudge's feelings. After all, Barack Obama's Homeland Security has blundered badly in its coverage of our borders, our ports, and our non-passenger flights as well as refusing to effectively police the groups with known terrorist ties that thrive here in the United States. They obviously are not serious about defending America's safety.

But what they ARE serious about is making it LOOK like they're providing security. Thus the big splash over new airport screening. The fact that the new procedures are demeaning, offensive, and indecent...that such searches without probable cause are clearly unconstitutional...and that such procedures defiantly resist targeting those air passengers that most closely fit the terrorist profile...mean nothing to Nanny State bureaucrats.

So, please let your Congressman know that the revision of these new TSA procedures should take a high priority in the new Congress. A failure to do so is a severe slap in the face to the American economy (more and more people will refuse to fly) and to the principles of American freedom.
Posted by DH at 10:20 AM