"When Swing Was King" Update 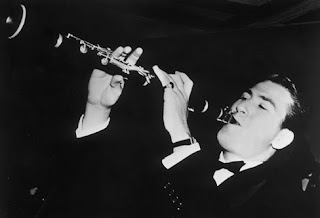 Because we present our "When Swing Was King" programs pretty regularly at several nursing homes, we want to keep the music and photos fresh for our audiences. That means we create for every month a new regimen of 13 big band numbers, a couple hundred photos and a lot of nifty trivia items about the songs, the musicians and the times.

Fantastic stuff and all accompanied by compelling photos of life during the 30s, 40s and 50s. The response continues to be terrific and, though we've done no real promotion other than speaking of it here on Vital Signs Blog, requests from other nursing homes and assisted living facilities are coming in almost every week. In fact, we present "When Swing Was King" Volume Four to a new place this afternoon.

Are we scheduled yet at the nursing home in your neighborhood? Or the one where a loved one of yours resides? November's program includes Glenn Miller, Duke Ellington, the Mills Brothers, Benny Goodman, Artie Shaw, Larry Clinton, Bing Crosby, Eddy Howard, Guy Lombardo, the Andrews Sisters, Harry James, Tommy Dorsey, and Ted Weems with a young vocalist named Perry Como.

I can almost hear a few of you saying, "Hey. I'd like to catch that myself!" Terrific! Come on along and be a part of the fun. We've enjoyed having guests before and we'll be sure and introduce you to some new friends.
Posted by DH at 11:30 AM