Let's Make the Elimination of Gerrymandering a Priority 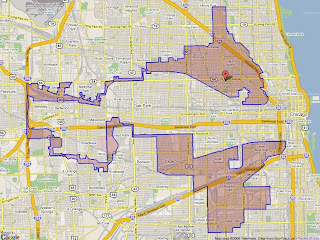 Bruce Walker over at American Thinker talks about gerrymandering, an enduring and critically important defect in America's democracy. Walker argues that the reforming momentum of the Tea Party could finally do away with this unjust evil and thus make our theory of representative, responsible government a reality again.

The accompanying illustration (Illinois' 4th District) reminds us of just how unnatural, how conniving and how autocratic gerrymandering has become.

...Gerrymandering helps insure that members of the House of Representatives and members of state legislatures do not really need to worry much about what voters think. Ominously for Americans who want their elected officials to listen to them, very sophisticated computer software almost allows the gnomes who redraw legislative boundaries to decide elections in many districts by the very careful selection of which voters will be in which politician's district. This is great if we want government that ignores us, filled with self-important nabobs who feel safe passing up town halls and debates, but the situation is awful for Americans who want politicians to listen to them.

Democrats have historically profited more from gerrymandering than Republicans, but the two political parties often collude to draw districts which protect incumbents of both parties. Gerrymandering is a perfect example of bloated corruption in American government today. Ending gerrymandering is not hard. Congress could pass a very simple statute like this: "All legislative districts in the United States shall be drawn compact, contiguous, and as nearly as possible along existing county or parish borders." Actually, Republicans in Congress a century ago did pass federal laws banning gerrymandering, and federal courts did not find any impediment to that (Democrats, however, opposed this reform, and it ended in the 1930s).

The Tea Party should push Congress to adopt this very direct and patently good law early in the next session -- and for several reasons. First, enactment of this law would forever change American politics for the better. Abolishing gerrymandering makes it very difficult for politicians to keep winning elections without real thought of defeat. Second, embracing this issue will place the Tea Party squarely in the ranks of the "good government" groups. Those who are unsure about the Tea Party would find in its support for this reform a very positive message about what the Tea Party wants for America.

Finally, supporting a federal bill to abolish all gerrymandering will put Barack Obama in a very tough situation. He has spoken piously about the problem of politicians choosing their voters. But Barack Obama, the Illinois State Senator, did just that, and the congressional and state legislative districts which he helped draw as a member of the Illinois State Legislature are about as offensive as any state in the nation. This includes Illinois congressional districts, Illinois state legislative districts, and even Chicago ward districts. Compare this crazy quilt with the serene and simple districts of neighboring Iowa. If the Tea Party pushed Congress to pass a law banning gerrymandering, anyone who opposed the bill would be supporting this old evil. So what would Obama do? If he were to support the bill, then he would infuriate many Democrat officeholders. If he were to oppose the bill, he would expose himself as just another corrupt Chicago politician.

Is ending gerrymandering the sort of issue which would capture the people's attention?...
Posted by DH at 10:01 AM