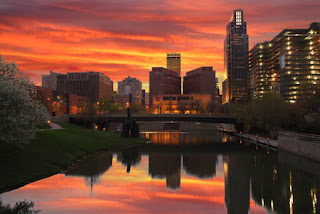 If you'd like, you can read the news report of the Omaha World-Herald describing the City Council's vote last night on the proposal to grant special protection on the basis of sexual orientation, gender expression and gender identification.

But I wouldn't bother.

The story is poorly written and heavily slanted. It does not even deal with the primary reason for the opposition; namely, the danger this law posed to citizens who maintain a biblical standard regarding sexuality. For though the W-H reporter presents the controversy as a denial of the rights of the LGBT minority, she ignores altogether the force of the law which would have denied the rights of the majority of Omaha's citizens.

Exaggerations? No. These things (and more) have already been the result of the passage of such ordinances in other places.

The W-H reporter does not speak to those very real concerns.

So, instead of bothering with the newspaper article (the TV news shows had pretty much the same kind of slipshod and biased reports), I suggest instead that you use the time to send a thank-you to the three Council members who voted against this law -- a law that the citizens of Omaha clearly opposed, a law that would have greatly endangered their freedoms of religion and expression.

You can write a letter, a very important action because those stay in the public record, by addressing the Council members by name. Then send your letters to: Council Office, 1819 Farnam Street, Suite LC-1, Omaha, NE 68183.

And you can also use these e-mail contact pages: Garry Gernandt; Jean Stothert; and Thomas Mulligan.

Here's what I wrote:

For your vote tonight in opposition to the proposed legal change regarding sexual orientation, gender expression and gender identification -- a profound thank-you. Your vote clearly reflects the opinions of your constituency...the whole city, for that matter. You have done an extremely important thing in protecting the religious freedoms of Omaha citizens and in protecting them, their businesses and the city itself from unjust, menacing lawsuits. Again, thanks for a job responsibly done.