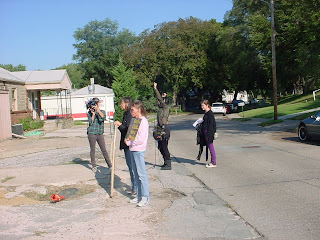 A Report from Claire Hartford

As usual, we were in front of the Bellevue abortion mill yesterday morning, praying and attempting to present to clients the good news of abortion alternatives. Quint and I were up near the entrance for awhile when we were joined by Bill and Valorie. There had been 4 clients go in early and soon 4 more clients came in. Valorie and I took turns talking to these women about the alternatives to abortion.

Shortly before Mark and Carol joined us, a young gal came up and said that she was doing a documentary on abortion centering on the Nebraska fetal pain law that goes into effect in October. She said she and her two colleagues were from New York and were interested in this bill and how it would affect abortion. She asked all of us if we would sign a waiver saying we gave them permission to film us. Valorie looked over the document and pointed out to the ladies some of its flaws. We politely refused to sign it.

That particular morning was one of those rare times that Denny wasn't around the corner. We had an outreach at a local nursing home early that afternoon and he had to get his work done on for Vital Signs Blog before 11. So I called him at home for some advice. He did a bit of checking and found out that this film crew was anything but independent or objective. In fact, they were pro-abortion activists, deeply entrenched with late-term abortionists Leroy Carhart and Warren Hern. He also pointed me to Julie Schmit-Albin from Nebraska Right to Life for more details.

Denny also said they could call him and we could arrange interviews with him, Julie, the Attorney General of Nebraska and any of several others. But he then added, "Don't hold your breath, hon. These guys don't want to really represent both sides. They're only there to do a hatchet job on pro-lifers and to sell these abortionists as sweet, altruistic boys. You can't do anything about them, of course. But don't be fooled by them either."

When I confronted the "film crew" with this information, they lied again. They claimed they were sincerely wanting to get both sides of the abortion issue and they knew nothing about being featured on the abortionists' web sites. But, of course, they were given the red carpet treatment from the abortionist -- who is so paranoid about cameras and tape recorders that he won't even allow clients to bring purses into his building! And, not surprisingly, they refused Denny's offer for interviews and even refused to interview the counselors of the pro-life pregnancy center just a few yards away.

I decided I'd better take a few pictures in self-defense. But I courteously explained to the abortion promoters why I was doing so. I frankly told them that we have been instructed by our lawyers to get photos of anything unusual at the clinic and, sorry to put it this way, ladies, but you are quite definitely unusual!

I also told them that because they kept lying to us that they had done enough filming us for today. And they complied.

When it was time for us to go, we went across the street to our cars to have a final prayer together. Val stayed behind to speak again to one of the film crew. She shared the gospel with her and suggested she might find Pastor Tim Keller’s book, Reason for God, of value since his book was written specifically with skeptics of Christianity in mind. And because Keller’s church is in New York, where the girls said they were based. 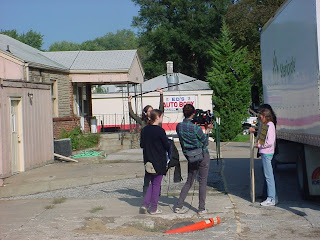 Val then decided to go the extra mile by driving home and bringing back a copy of the book. After waiting quite awhile for the girls to come out of the abortion clinic, Val was pleased when the girl did receive the book. In that brief conversation, Val again spoke of the girls being disingenuous in their claims. The young lady replied, “We don’t like to tell a lot of people about what we do.”

Sadly, that's a statement that could describe just about every facet of the promotion and practice of abortion.

Please be praying that God thwart the evil designs of this pro-abortion film project and that these young ladies, already hardened in a post-modern, anti-Christian mindset, would seek out the liberating truths that were shared with them by the Christians yesterday morning. Pray that they will be honest enough to read Tim Keller's book and find the answers that God wants so much to reveal to them.

And keep praying for the sidewalk counseling team there at the abortion clinics. We need it.