The President's "Pastors for ObamaCare" 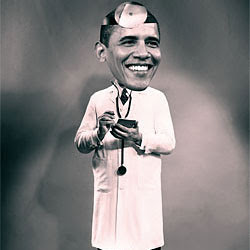 President Barack Obama may not go to church himself anymore and he may feel outright disdain for evangelical and Catholic clergy, but that doesn't mean he dislikes all preachers.

Especially not the ones who will roll over and do his bidding.

Here, from James Towey's article over at the Wall Street Journal, is a pretty disgusting picture of Obama's manipulation of liberal clergy and the White House office for "faith-based initiatives."

Like most liberals, Obama twists the Constitution's doctrine of separation of church and state into his own key chain. When the pulpits urge adherence to a God that's higher than the government, leftists want them shut down. But when those pulpits provide cover and assistance for the Nanny State, they're just dandy.

But don't take it from me. Here's Mr. Towey.

I was George W. Bush’s director of faith-based initiatives. Imagine what would have happened had I proposed that he use that office to urge thousands of religious leaders to become “validators” of the Iraq War?

I can tell you two things that would have happened immediately. First, President Bush would have fired me—and rightly so—for trying to politicize his faith-based office. Second, the American media would have chased me into the foxhole Saddam Hussein had vacated.

Yet on Tuesday President Obama and his director of faith-based initiatives convened exactly such a meeting to try to control political damage from the unpopular health-care law. “Get out there and spread the word,” Politico.com reported the president as saying on a conference call with leaders of faith-based and community groups. “I think all of you can be really important validators and trusted resources for friends and neighbors, to help explain what’s now available to them.”

Since then, there’s been nary a peep from the press.

According to the White House website, the faith-based office exists “to more effectively serve Americans in need.” I guess that now means Americans in need of Democratic talking points on health care. Do we really want taxpayer-funded bureaucrats mobilizing ministers to go out to all the neighborhoods and spread the good news of universal coverage?...
Posted by DH at 11:22 AM