Legal Abortion Is Not Safe Abortion 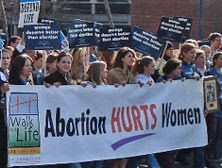 After all, God designed a woman's body to receive and nurture her child throughout pregnancy, not for the inviolate sanctuary of her womb to be opened and the baby violently wrenched from its attachment to her.

Abortion -- no matter who performs it, no matter under what conditions it is performed -- is a cruel act that kills an innocent boy or girl.

And abortion is always a bizarre act of violence that endangers the life, health and spirit of the woman undergoing it.

When, as in the United States, abortionists conduct their grisly trade completely unchecked by either medical peers or health and sanitation officials, you get thugs like Steven Brigham (whose greedy brutality is described below) and one wonders how many others whose dastardly crimes are going without public notice.

Three weeks ago, physician Steven Brigham led a car caravan of patients from his Voorhees abortion clinic to his facility in Elkton, Md. After one of the patients was critically injured during her surgery there, Brigham put the semiconscious, bleeding woman into the back of a rented Chevrolet Malibu and drove her to a nearby hospital emergency room rather than call an ambulance.

Those details are contained in documents issued over the last 10 days by the Maryland Board of Physicians and Elkton police. The two agencies have launched a wide-ranging investigation into Brigham's long-troubled abortion business, which he conducts in New Jersey, Pennsylvania, Maryland, and Virginia.

On Aug. 25, the Maryland Board of Physicians ordered Brigham, 54, to stop performing abortions in that state, where he has never been licensed to practice medicine. By then police had raided Brigham's Elkton facility - from which they said they removed 35 "late-term fetuses and fetal parts" - as well as the Voorhees headquarters of his chain of 15 clinics, which does business as American Women's Services.

Maryland authorities seek missing medical records, and are looking into Brigham's habit of sending late-term patients across state lines after initiating their abortions in Voorhees.

Brigham's four New Jersey clinics cannot provide abortions after the first trimester (14 weeks of pregnancy) because they do not meet state safety requirements for such risky outpatient surgeries. Brigham has for years performed the first phase of such abortions there - the insertion of absorbent rods that dilate the patient's cervix over a day or more - and sent them to a facility in another state for the surgery. New Jersey law doesn't address whether inserting dilators constitutes abortion...

Maryland's action is just the latest problem for the doctor, whose medical license has been revoked, relinquished, or temporarily suspended in five states over the last 18 years...

The intrinsic dangers of abortion should make state authorities all the more diligent to oversee the abortion mills run by Planned Parenthood and others. But they rarely do. Indeed, veterinarian clinics, beauty shops and tattoo parlors are much more closely inspected and governed than are abortion facilities.

Why? Medical organizations, attorneys general, local authorities and police departments are all intimidated by pro-abortion politicians and their friends in the mainstream media.

It's another tragic case where political correctness kills...quite literally.

(This is why we are urging state attorneys general, like Jon Bruning here in Nebraska, to become careful, bold and diligent defenders of women by more stringently policing the cavalier conduct of abortionists.)