We Can't Afford to Be the World's Patsy Anymore 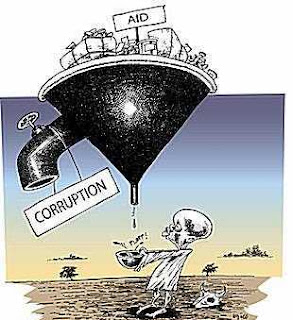 The Millennium Challenge Corp. (MCC), the U.S. government agency that provides large-scale grants to the chosen countries to reduce poverty and stimulate economic growth, will begin distributing $540 million in aid next month to Senegal despite persistent questions from members of Congress and others about the African nation's commitment to good government and democracy.

Although MCC says control of corruption is the single most important indicator by which a nation is deemed qualified for aid money, a review of the State Department's most recent report on human rights reveals that Senegal — and virtually every country receiving similar grants — has been criticized for government corruption...

Sheila Herrling, MCC vice president for policy and evaluation, said the organization takes corruption seriously and continues to monitor countries that receive the grants. "Corruption is a fact of life, not an if, in all countries," she said. "The question is how we deal with it."

But how they "deal with it" is 1) to ignore it completely while 2) giving out more millions of American taxpayer money to foreign thugs. For the fact is that MCC has never terminated (not even suspended) aid to any country because of corruption.

Please keep in mind that in America's lousy economy, people are losing jobs, homes and savings. The country's infrastructure is crumbling, cops and firefighters are being laid off, medical services to the elderly are being curtailed. And yet, foreign aid programs are taking billions out of the country, much of which is invested in ungrateful nations, corrupt regimes, states guilty of horrendous human rights abuses, and even some governments that are sworn enemies of the U.S.

But then, unless November brings new blood into Washington, blood that boils over this kind of outrageous, counter-productive spending, America will continue to play the paternalistic patsy for every cash hungry government on earth.

Until, that is, there's just nothing left to give.