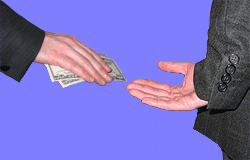 By the time I reached my senior year, I discovered I didn't much care for the academic element of school. And so I skipped class a lot, a fairly reckless thing to do in a day when there still existed truant officers and outraged parents.

How different that experience might have been had I the luxury of attending school in the 21st Century where some lucky kids are being paid to attend class and take tests. In some places, like St. Louis here, even their families get government cash to sign their kids up for certain schools.

So the next time you complain about high property taxes, taxes that are (given the lousy productivity of your local government school) a lot higher than they should be, be comforted by this thought. Your taxes are not only paying for buildings, teachers, security guards, value-free sex ed curricula (and the condoms accompanying it), leftist-oriented textbooks, athletic equipment for 19 sports, computers, busses, psychologists and a gaggle of administrators -- you may also be contributing to local government's payola schemes, bribing kids and parents to make it to class.

So there's my excuse to Mr. Musciano and the others who tried to keep me from ducking out for an Orange Julius or a swim in the lake, I was just born too late.

Had the price been right, I would have had a terrific attendance record.
Posted by DH at 11:18 AM