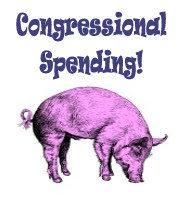 The economy is in the tank and things are looking worse every day. Our national debt is poised over us like the sword of Damocles, a sword that is already popping the balloons of entrepreneurship, enterprise, and hope. Nevertheless, instead of tightening spending, Congressional Democrats remain stubbornly, irrationally, and dangerously stuck on stupid.

The proof is all around -- the bailouts, the stimulus, the give-aways, the nationalization of entire industries, and so on. And yet the proof just keeps building up. For instance, last night the Democrat-dominated Congress passed a THUD appropriations bill for the 2008 Fiscal Year (THUD is Transportation, Housing and Urban Development) that will cost Americans $67.4 billion!

Will they get away with it? Or will November bring us a new Congress? That, my friends, is up to you and me.