"Have You Heard of Anybody in the Federal Government Losing Their Job?" 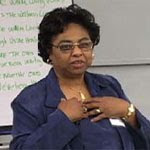 "You've heard of a lot of layoffs. Have you heard of anybody in the federal government losing their job? That's all I need to say."

This employment tip was passed on from Shirley Sherrod, a USDA official, to an audience at the recent NAACP convention.

And it was to that same audience that Ms. Sherrod explained how she had purposefully withheld help from a farmer because he was white.

It wasn't an appropriate anecdote to share, especially given the attention given to the NAACP's denunciation of supposed racism in the Tea Party movement. For though the evidence of racism cannot be established on the latter charge, Ms. Sherrod's racism was right there on You Tube for all the world to see.

Which, of course, ends up making Ms. Sherrod's employment advice ("Have you heard of anybody in the federal government losing their job?") most ironic, indeed.
Posted by DH at 10:22 AM