Drug Smuggling Music Is Dangerous to Your Health 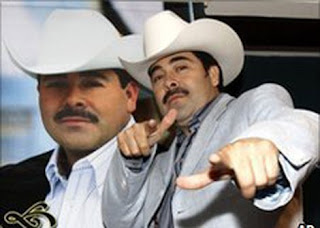 40-year old Mexican singer Sergio Vega (known as El Shaka) was murdered just hours after he had denied press reports of his death. Vega was on his way to perform a concert when gunmen in a truck opened fire on his red Cadillac. Vega was hit and crashed the vehicle, leaving him unable to escape the murderers who came and finished him off.

A likely motive for Vega's murder is his popularity as a singer of narcocorrido music, songs which glorify the business of drug smuggling. These songs often give details of real people and real places, making heroes out of selected persons in the trade.

But one man's hero is another man's rival. Therefore, narcocorrido singers are in danger of offending other drug gangs.

And that danger couldn't be more real. Indeed, police confirm that several singers specializing in narcocorrido music have been murdered in the last three years. Before that, in the years between 2006 and 2008, more than a dozen notable Mexican musicians, many of them connected to the genre, were done in.

One hardly needs evidence of this bloody degree to know that drug smuggling is anything but a victimless crime. But just ask the Mexican police how crazed the carnage can get. For that matter, just ask the police of the Southwestern United States who are struggling without adequate federal help against the Mexican drug trade.

And just ask the ghost of El Shaka who now wishes he would have stuck to love songs.
Posted by DH at 12:47 PM