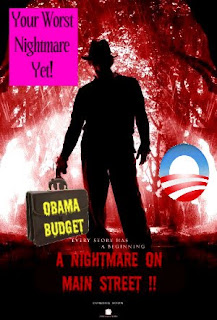 Don't worry about seeing that new film "Nightmare on Elm Street," former lieutenant governor of New York Betsy McCaughey can catch you up on a much more frightening story.

Call it "Nightmare on Wall Street" or "Nightmare on Main Street," she'll give you the lowdown on a horror flick in which the victims are...gulp...us!

McCaughey calls her article, "Bam's Budget is a Monstrosity" and you'll find it in the New York Daily News.

I'm not interested in another debate over big government versus small government," President Obama told a Buffalo crowd on May 13. What this means is that the President doesn't care about how much freedom you have.

When government spends more, less is left for people to spend as they choose. And the events of the last four months indicate that Americans are being conned into giving up their freedom.

$3.8 trillion also equals 25% of everything produced in the U.S. (Gross Domestic Product). State and local government spending brings the total to 42% of GDP.

Government spending has crossed the 40% line just twice in American history: when the nation plunged into World War II and again last year, during the economic crisis. The Obama administration intends to make big government permanent, with spending at 40% even in 2020, when no crisis is expected. The White House rosily predicts full employment that year.

The President claims he pared the budget line by line - which is what he promised to do when he was a candidate in 2008. But the numbers prove otherwise. Foreign aid is increased 50% from 2011 to 2015. Most Americans would rather pay their mortgage...

When the President announced his budget, he said, "It is time to save what we can, spend what we must and live within our means once again." But his budget includes such vast spending increases that even after hiking income taxes, capital gains taxes, dividend taxes and estate taxes, the nation faces a $1.3 trillion deficit in 2011, according to the Congressional Budget Office. Obama's budget will result in a federal debt of $20.3 trillion by 2020, $5trillion more than it would be without Obama's new policies...

Congress is taking cover behind the President's new Commission on Fiscal Responsibility, which is not scheduled to report until after the election. Commission members are already floating the idea of a VAT to pay for big government...

The President has said he will not rule out any commission recommendation, even a value-added tax. Don't be snookered by this strategy of delaying "deficit reduction" until after the fall election and don't be misled by the phrase "value-added." A VAT would be nothing less than a Vanishing America Tax. Voters should interrogate candidates about their stand on it and stop government from growing beyond the consent of the governed.
Posted by DH at 11:14 AM