Is There an Intruder in YOUR Computer? 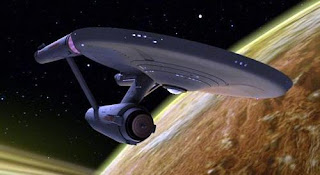 At a party a couple of weeks ago I had a talk with a couple of guys who specialize in computer security management for the U.S. government. What they told me about worms, viruses, professional hackers, computer vulnerability and more was scarier than a Hitchcock movie -- and a lot more real.

This Atlantic article served to repeat the experience. Check it out.

Imagine your computer to be a big spaceship, like the starship Enterprise on Star Trek. The ship is so complex and sophisticated that even an experienced commander like Captain James T. Kirk has only a general sense of how every facet of it works. From his wide swivel chair on the bridge, he can order it to fly, maneuver, and fight, but he cannot fully comprehend all its inner workings. The ship contains many complex, interrelated systems, each with its own function and history—systems for, say, guidance, maneuvers, power, air and water, communications, temperature control, weapons, defensive measures, etc. Each system has its own operator, performing routine maintenance, exchanging information, making fine adjustments, keeping it running or ready. When idling or cruising, the ship essentially runs itself without a word from Captain Kirk. It obeys when he issues a command, and then returns to its latent mode, busily doing its own thing until the next time it is needed.

Now imagine a clever invader, an enemy infiltrator, who does understand the inner workings of the ship. He knows it well enough to find a portal with a broken lock overlooked by the ship’s otherwise vigilant defenses—like, say, a flaw in Microsoft’s operating platform. So no one notices when he slips in. He trips no alarm, and then, to prevent another clever invader from exploiting the same weakness, he repairs the broken lock and seals the portal shut behind him. He improves the ship’s defenses. Ensconced securely inside, he silently sets himself up as the ship’s alternate commander. He enlists the various operating functions of the ship to do his bidding, careful to avoid tripping any alarms. Captain Kirk is still up on the bridge in his swivel chair with the magnificent instrument arrays, unaware that he now has a rival in the depths of his ship. The Enterprise continues to perform as it always has. Meanwhile, the invader begins surreptitiously communicating with his own distant commander, letting him know that he is in position and ready, waiting for instructions...
Posted by DH at 12:07 PM