The Grave Errors of Laura Bush 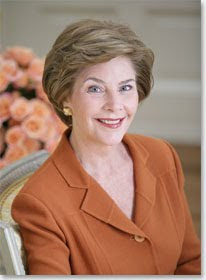 Laura Bush has a new book out, one in which she not only admits her hopes that abortion remains legal but also her favoring the legalization of same-sex marriage. It's a very sad and ugly thing. For holding these positions means that Mrs. Bush is turning her heart away from the barbaric murder of preborn boys and girls as well as turning her heart away from the order of creation established by Almighty God.

In trying to be trendy, Mrs. Bush is showing a shameful lack of grace, compassion, intellectual honesty and respect for the Bible. And because of her high visibility, her promotion of such highly immoral positions will do great damage.

Sharon Slater, in the latest newsletter of Family Watch International, responds in particular to Mrs. Bush's comments in her book (and to Larry King) about homosexual marriage:

I have always had a lot of respect for former U.S. first lady Laura Bush. She seemed to be a good example of motherhood and traditional family values when she was in the White House. I met her briefly at a UN conference and had always thought she was on the same page on family issues.

However, I was quite disappointed when I heard one of her recent interviews promoting her new book where she spoke out in favor of same-sex marriage. Here is a direct quote from Mrs. Bush:

“There are a lot of people who have trouble coming to terms with that because they see marriage as traditionally between a man and a woman. But I also know that, you know, when couples are committed to each other and love each other, that they ought to have, I think, the same sort of rights that everyone has.”

In her book she reveals that “I had talked to George about not making gay marriage a significant issue [in the 2004 presidential campaign]. We have, I reminded him, a number of close friends who are gay or whose children are gay.”

I was sad to see that Mrs. Bush has fallen for the “any-two-people-who-are-committed-to-each-other-and-love-each-other-should-be-allowed-to-marry” argument. Her statement shows a complete and utter lack of understanding of how legalizing same-sex marriage negatively impacts the institution of marriage, parental rights, religious freedom, but especially children.

I wonder if Mrs. Bush is aware that Massachusetts parents who tried to opt their young children out of lessons intended to help them accept homosexuality as healthy and normal were told by their state Supreme Court that because same-sex marriage was legalized in their state, schools not only the right but also had the duty to promote homosexuality to their children, and they had no right to opt them out.

I wonder if Mrs. Bush realizes that where same-sex marriage is legal, adoptions by homosexual couples usually follows, which usually requires that children be severed from one of their biological parents to make this happen. I wonder which parent she thinks children should do without, the mother or the father.

I wonder if she realizes the havoc that tampering with divorce laws has caused and if she thinks somehow we can experiment and tamper with the very definition of marriage without wreaking more havoc on the marriage institution and thus onto children and society. (Family Watch gives good reasons why same-sex marriage should not be legalized in our Policy Brief, and there is an entire chapter describing the negative impact of legalizing same-sex marriage in my book, Stand for the Family.)

I suppose there is a possibility that Mrs. Bush does understand the social implications of legalizing same-sex marriage but simply decided that not making “couples who are committed to each other and love each other” distressed at not being able to marry was a more important goal.

I am continually amazed at how many people in public life and in the media who should have a more sophisticated understanding of what is truly at stake in radically redefining such a fundamental social institution but who, like Mrs. Bush, simply do not...
Posted by DH at 9:26 AM