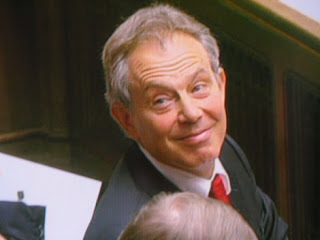 Sri Carmichael at the London Evening Standard tells us that former British Prime Minister has just landed a nice gig as a "strategic adviser" to Khosla Ventures, a California company that bankrolls businesses looking to profit from technology that reduces global warming. The job will pay Blaire a minimum of £700,000 a year for opening doors through his influence, prestige and international contacts.

Like Al Gore, Mr. Blair wants to save the planet -- but also make sure he gets his own "green" in the process.

Thus, in addition to this new job with Khosla Ventures, a company started by Indian billionaire Vinod Khosla, Blair has garnered several very lucrative posts since leaving office including a £1 million deal to advise the ruling royal family of Kuwait and a cool £4.6 million advance for his memoirs. There are also his speaking engagements at £100,000 a pop -- though always to audiences outside of Great Britain.

After what he did to the country, they can't afford his prices.

(Hat tip: E. Calvin Beisner of the Cornwall Alliance)
Posted by DH at 7:47 AM