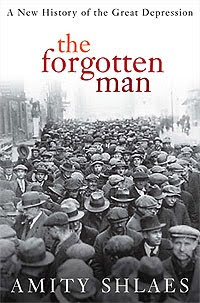 Last night several of us enjoyed a spaghetti dinner and then a terrific Book It! discussion here at the house over Amity Shlaes' riveting work, The Forgotten Man: A New History of the Great Depression. Authentic history (backed by extensive and well-balanced research) dares to come against the cherished myths of the administrations of Franklin Delano Roosevelt, producing what we all agreed was one of the most enlightening and important historical texts to come along in several years.

The discussion was lively over several of the subjects Shlaes undertakes in the book but a great deal of our talk concerned the striking parallels between FDR's political ideology (and tactics) to those of Team Obama -- the adulation and unquestioning support provided by the press, the emphasis on rhetoric, the cult of personality, the drawing upon academia for ideas, the dependence on courts to win what they could not through public opinion, the naive understanding of foreign affairs, the exploitation of class warfare, the creation of grievances and scapegoats, the cavalier thrills of experimentation, the disdain for business, the lack of respect for religion, the overspending and dismissal of debt, and more.

The Forgotten Man: A New History of the Great Depression is not easy reading, by any means. But it is quite stirring reading...and of the utmost relevance for our time. We all recommend it most highly.
Posted by DH at 2:41 PM