Coming Soon to a Liberal Church Near You 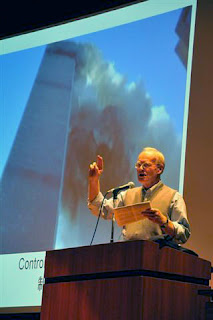 David Ray Griffin, professor emeritus at a major United Methodist seminary, is on a new book tour presenting his convictions that the 9-11 attacks were part of a Bush Administration plot. Among his stops are several Episcopal and UM churches. ("Yes, Mildred. The speaker is a leftist nutcase who believes Bush was a devil, that Jesus wants us to overthrow the American 'empire' and that God is in the process of evolution... but they will be serving tea and those cream cakes you love afterward.")

But don't expect Griffin to target just Republicans. Oh no, he's actually a pretty broad-minded crank. This latest book, for instance, contends that Team Obama shouldn't carry on the war in Afghanistan. Worse yet, they seem to be trying to undermine 9-11 conspiracy theorists like himself. Humph. We can't have that.

And, by the way, i's not just the liberal Episcopalians and the United Methodists backing the august Dr. Griffin. His most controversial book about the Bush 9-11 conspiracy (For crying out loud, the fellow's written 9 of them!) was published by Westminster John Knox Press, the official publishing house of the Presbyterian Church (USA).

And people actually scratch their heads over why these liberal denominations are dying?
Posted by DH at 10:21 AM