Is We All Just Critters? 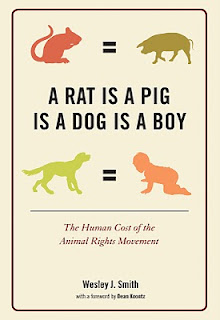 Noted ethicist and pro-life advocate Wesley J. Smith has responded to Matthew Scully's critique of Smith's latest book, A Rat Is a Pig Is a Dog Is a Boy: The Human Cost of the Animal Rights Movement, in an exceptional article for National Review. I really urge you to read the 2-page rebuttal in its entirety for it really is a fine overview of controversies swirling around animal rights. Solid stuff.

But for those in a hurry, let me give you a few paragraphs:

So what's the book really about? With A Rat Is a Pig Is a Dog Is a Boy, I hope to clear up the confusion in the public mind between promoting "animal welfare" -- a noble cause, which I endorse -- and "animal rights," which I oppose. The former acknowledges the ethical propriety of using animals for human benefit, while vigorously insisting on concomitant duties to treat animals humanely. In direct contrast, animal-rights ideology disdains the welfarist approach as "speciesism"; i.e., "discrimination" against animals --and dogmatically insists we have no right to consume meat, to wear leather, to conduct animal research, and, for some, even to own dogs. In other words, the ultimate goal of animal rights -- which believers understand to be a multi-generational project -- is ending all animal domestication no matter how beneficial to humans.

Thus, rather than a movement dedicated merely to being nicer to animals, as many suppose, animal rights is actually a subversive ideology -- for some, a quasi-religion -- that establishes both express and implied equivalences between the moral value of human beings and that of animals. Indeed, I took the title of my book from a famous statement by Ingrid Newkirk, leader of People for the Ethical Treatment of Animals (PETA), who told Vogue back in 1989, "Animal Liberationists do not separate out the human animal, so there is no rational basis for saying that a human being has special rights. A rat is a pig is a dog is a boy. They are all mammals."...

Regardless of the approach, to the animal-rights true believer, that which is done to an animal is judged as if the same action were done to a human being. Hence, many animal rightists believe cattle ranching is as odious as slavery and research on lab rats an equivalent evil to Mengele's experiments in the camps.

PETA explicitly pitched that nihilistic message for two years in its infamous pro-vegetarian Holocaust on Your Plate campaign. Holocaust on Your Plate juxtaposed historic photographs of the Shoah to depictions of animals, for example deceased, emaciated inmates presented adjacent to a photo of dead pigs. The text stated in part "Like the Jews murdered in concentration camps, animals are terrorized when they are housed in huge filthy warehouses and rounded up for shipment to slaughter. The leather sofa and handbag are the moral equivalent of the lampshades made from the skins of people killed in the death camps."

Such bizarre moral equivalency is embraced fervently and literally by many animal rightists -- again, as distinguished from animal-welfare supporters -- and generates intense and angry emotions. In their zeal, some tum to violence and terrorism as part of loose-knit cells of such organizations as the Animal Liberation Front (ALF) and Stop Huntingdon Animal Cruelty. To many animal-rights leaders -- Gary Francione and Wayne Pacelle, head of the Humane Society of the United States, are notable exceptions -- scandalously refuse to condemn this criminality. For example, PETA, on its website, compares ALF to the French Resistance and the Underground Railroad. This is odd for a supposedly peaceable movement, considering that "direct actions" have included death threats, bombings of researchers' homes and cars, arson, burglary, and identity theft...
Posted by DH at 9:08 AM