CNN Is a Sinking Wreck 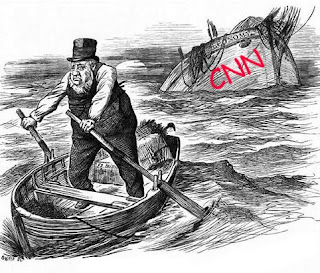 Here's two effective questions to ask those that control the television screens that envelop our lives: Number One: What television networks beat CNN in last week's primetime cable ratings?

The answer, as listed by the folks who count the numbers, is that CNN was beaten by USA, TNT, the History Channel, ESPN, the Family Channel, FX, the Cartoon Network, and a gang of others. In fact, CNN bottomed out at a shameful Number 32!

But you say, "Well, that's understandable. After all, in the evening people are looking to cable TV for entertainment. They want to watch movies or other kinds of fluff. A news network really makes its gravy during the day. So I'll bet CNN really cleans up at other times."

Then why do the numbers show that the Number Two slot in the primetime ratings happens to be Fox News? Indeed, Fox not only soars above it's competitors (the loony left MSNBC which came in at #26 and the lowly CNN), it draws much bigger audiences in primetime than all the movie channels, the Cartoon Network, and ESPN.

And about that argument that CNN must do better in daytime ratings? It did. It zoomed up the charts from that debasing Number 32 all the way to, ahem...Number 29. But, give 'em a hand; they did at least inch past MSNBC.

So, in light of these facts, here's question Number Two: If CNN produces such a shoddy product that viewers avoid it like the plague when they hold the remote control in their own hands, then why does your doctor, restaurateur, airport administrator and gas station manager think we are going to like being forced to watch CNN in their places of business?

Why don't we start politely (but repeatedly) asking that question to the powers that be? Let's start asking them to replace an extremely unpopular news network with the most popular one. It just makes sense, doesn't it? And, as I've written before, if they are afraid of offending Barack Obama by having Fox News on the telly, by all means opt for the Food Channel or ESPN.