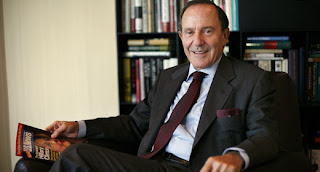 Mortimer B. Zuckerman, chairman and editor in chief of U.S. News & World Report and publisher of the New York Daily News (and one of the richest men in the world) has paid close attention to Barack Obama's first year in the Oval Office. After all, that's Zuckerman's job. But he was also concerned as a citizen, a naturalized citizen who generously supports Democrat politicians and is particularly interested (as should we all be) in the freedom and prosperity of Israel.

Zuckerman is one of the many who bought into Obama's promises of hope, positive change, non-partisanship, unity, transparency, fiscal responsibility, etc. Indeed, Mort Zuckerman was a fellow who really went out on the limb for Obama. He voted for him. His newspaper endorsed him. He was constant and energetic in his support.

But now -- Mort Zuckerman is anything but pleased.

Here's a portion of his article in The Daily Beast:

Obama punted on the economy and reversed the fortunes of the Democrats in 365 days.

He’s misjudged the character of the country in his whole approach. There’s the saying, “It’s the economy, stupid.” He didn’t get it. He was determined somehow or other to adopt a whole new agenda. He didn’t address the main issue.

This health-care plan is going to be a fiscal disaster for the country. Most of the country wanted to deal with costs, not expansion of coverage. This is going to raise costs dramatically.

In the campaign, he said he would change politics as usual. He did change them. It’s now worse than it was. I’ve now seen the kind of buying off of politicians that I’ve never seen before. It’s politically corrupt and it’s starting at the top. It’s revolting.

Five states got deals on health care—one of them was Harry Reid’s. It is disgusting, just disgusting. I’ve never seen anything like it. The unions just got them to drop the tax on Cadillac plans in the health-care bill. It was pure union politics. They just went along with it. It’s a bizarre form of political corruption. It’s bribery. I suppose they could say, that’s the system. He was supposed to change it or try to change it...

Obama’s ability to connect with voters is what launched him. But what has surprised me is how he has failed to connect with the voters since he’s been in office. He’s had so much overexposure. You have to be selective. He was doing five Sunday shows. How many press conferences? And now people stop listening to him. The fact is he had 49.5 million listeners to first speech on the economy. On Medicare, he had 24 million. He’s lost his audience. He has not rallied public opinion. He has plunged in the polls more than any other political figure since we’ve been using polls. He’s done everything wrong. Well, not everything, but the major things.

I hope there are changes. I think he’s already laid in huge problems for the country. The fiscal program was a disaster...

The political leadership of the world is very, very dismayed. He better turn it around. The Democrats are going to get killed in this election. Jesus, looks what’s happening in Massachusetts...

I can’t predict things two years from now, but if he continues on the downward spiral he is on, he won’t be reelected. In the meantime, the Democrats have recreated the Republican Party. And when I say Democrats, I mean the Obama administration. In the generic vote, the Democrats were ahead something like 52 to 30. They are now behind the Republicans 48 to 44 in the last poll. Nobody has ever seen anything that dramatic.
Posted by DH at 12:06 PM