How Real Is Hell? 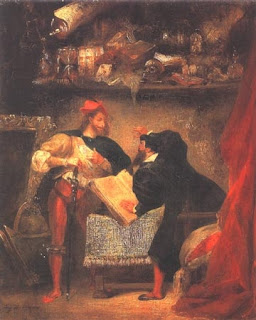 When the subject of hell comes up in Christopher Marlowe's great medieval drama, Dr. Faustus says to Mephistopheles,"I think hell is a fable."

To which the demon (infinitely more knowledgeable on the subject) replies, "Ay, think so still 'til experience change thy mind."

(Eugene Delacroix's masterful depiction of their conversation is at left.)

Christian author, researcher and pastor Randy Alcorn recently came across the following note which expresses a dismissal of hell's reality similar to that made by the tragically naive Faustus.

"You seem to be missing the big point here—the complete absurdity that God hurts people for any reason! Jesus told us God is not like the pagan deities who tortured people in Hades, but that he is forgiving, loving, and caring. If one is willing to look, there's substantial evidence contained in the gospels to show that Jesus opposed the idea of Hell. True, there are a few statements that made their way into the copies of copies of copies of the gospel texts which place “Hell” on Jesus’ lips, but these adulterations came along many decades after his death."

Randy's response is given in full on his blog and I urge you to check it out. It's very good. Very honest. And thoroughly biblical. But as a teaser, I print below an excerpt.

...This comment is misinformed. The truth is that the oldest and most reliable biblical manuscripts include Christ’s explicit statements about Hell. The gospel writers didn’t make up their Lord’s words in the gospels. They simply recorded them. And the hyper-careful scribes didn’t add them to the manuscripts, they simply copied them, word for word, from one to another.

The truth is that Jesus spoke more about Hell than anyone else in all of Scripture. (Because of its importance, I devoted a chapter of my book If God Is Good to the subject of Hell.) Jesus referred to Hell as a real place and described it in graphic terms (see Matthew 10:28; 13:40–42; Mark 9:43–48). He spoke of a fire that burns but doesn’t consume, an undying worm that eats away at the damned, and a lonely and foreboding darkness.

Christ says the unsaved “will be thrown outside, into the darkness, where there will be weeping and gnashing of teeth” (Matthew 8:12). Jesus taught that an unbridgeable chasm separates the wicked in Hell from the righteous in paradise. The wicked suffer terribly, remain conscious, retain their desires and memories, long for relief, cannot find comfort, cannot leave their torment, and have no hope (see Luke 16:19–3 1).

Our Savior could not have painted a bleaker picture of Hell...

Why do I believe in an eternal Hell? Because Jesus clearly and repeatedly affirmed its existence. As [Dorothy] Sayers suggested, you cannot dismiss Hell without dismissing Jesus...

Who are we to think we are better than Jesus?

Or that when it comes to Hell, or anything else, we know better than he does?

God determined he would rather endure the torment of the Cross on our behalf than live in Heaven without us. Apart from Christ, we would all spend eternity in Hell. But God so much wants us not to go to Hell that he paid a horrible price on the cross so we wouldn’t have to. This can be distorted into self-congratulation: if God paid such a great price for us, we must be extremely valuable. A better perspective is that if God had to pay such a great price for us, it emphasizes both the extent of his love and the extent of our evil.

Jesus asks a haunting question in Mark 8:36–37: “What good is it for a man to gain the whole world, yet forfeit his soul? Or what can a man give in exchange for his soul?”

The price has been paid, but we can’t benefit from forgiveness unless we choose to receive it. A convicted criminal may be offered a pardon, but if he rejects it, he remains condemned.

By denying Hell’s reality, we lower the stakes of redemption and minimize Christ’s work on the cross. If Christ’s crucifixion and resurrection didn’t deliver us from a real and eternal Hell, then his work on the cross is less heroic, less potent, less consequential, and less deserving of our worship and praise...
Posted by DH at 12:13 PM