Nebraska Senator Ben Nelson: Can He Buy a New Reputation? 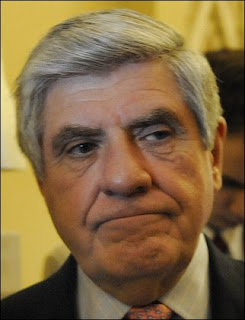 Nebraska Senator Ben Nelson is running an expensive TV campaign to try and regain the respect and trust of the voters of his state. But will it work? After all, his TV commercials are full of distortions and outright lies; he has permanently lost the support of Nebraska's pro-life leadership; and his reputation as an honest, straight-talking independent just hasn't matched his recent actions.

It's going to be a hard sell.

Here, for example, are a few of the items which Nelson's TV ads have to overcome.

1) Ben Nelson voted the Democrat party line on extending the U.S. debt limit an additional $1.9 trillion! He did so without shame. Harry Reid wants it; I'll do it. That hardly matches the picture of an independent, forward-looking, fiscal conservative that Nelson's ads are trying to paint.

2) Ben Nelson has been completely silent on his party's illegal actions in the Senate; namely, refusing to seat Massachusetts Senator Scott Brown and continuing to let former Senator Paul Kirk conduct business as usual, including casting that all-important 6oth vote on the debt ceiling. There's no way to spin this -- it is sheer tyranny by the Democrats. Kirk is no longer Senator; Scott Brown won that seat and has been acknowledged by his state officials. For Ben Nelson to smile and go along with this brazen injustice belies his claims to be independent, fair, honest and wanting only what's right for Nebraska. No, as much as anything else in Ben Nelson's craven conduct in recent weeks, his complicity in this illegal power play proves he is not at all the kind of man Nebraskans once thought he was.

3) Among other recent actions of Senator Nelson's that have alarmed former friends is the smug and superior tone he has struck as he presents himself as a straightforward, principled independent. But his deeds portray a conniving (if somewhat inept) back-room dealer.

Sarah Kliff over at Newsweek points out that his flip-flopping on abortion (he formerly has claimed to be a devout pro-lifer) has exposed him to severe criticism from both sides of the issue. She refers to an interview Nelson gave with LifeSiteNews.com in which he openly bragged about his duplicitous dealings:

This interview is telling in a number of ways. First, it says a lot about Nelson's views on health-care reform as a means of bartering. The line that sticks out to me is this take on legislating: "You have to play it." From the abortion language to the Cornhusker Kickback, Nelson has reached Lieberman-like levels of posturing himself as the crucial 60th vote and has done so in pretty unflattering ways. What baffles me is why he continues to do so. He has gotten hounded by groups on both sides of the abortion issue who didn't like his compromise and engendered threats of lawsuits.

I could understand facing such blowback for an electoral gain, but Nelson's approval ratings back in Nebraska have plummeted, dropping below 50 percent in mid-January. If you're going to get flak for standing up against abortion, go the Bart Stupak route and embrace it. But this flip-flop approach does not seem to add up to much in the way of gains.

Philip Klein over at The American Spectator says of Nelson's new pose as a clever backroom conniver, "It goes without saying that this is completely absurd. Nelson's leverage was at its peak when Democrats were desperate to pass the Senate health care bill before Christmas, and if he was going to take a principled stand, that was the time to do it. Now that Brown's victory has has made him largely irrelevant, it's easy to say that he was prepared to hold up the bill over abortion language. It is pretty amusing, nonetheless, to see how he tries to squirm his way out of the situation like a second grader in the principal's office."

4) However, Senator Nelson's braggadocio about being a whistle-blower was called something else by President Obama in his State of the Union speech the other night. Said Obama of the "health care reform" bill in the Senate, “I take my share of the blame for not explaining it more clearly to the American people. And I know that with all the lobbying and horse-trading, this process left most Americans wondering what’s in it for them.”

Of course, the horse-trading label fits Ben Nelson more than anybody in town and the now infamous "Cornhusker kickback" made it quite clear that the President's unflattering reference was made directly of the Nebraska Senator. Poor fellow, is there nowhere for Ben Nelson to turn nowadays without being treated like a bad joke? He so much wanted to be likened to James Garner's riverboat gambler but he has ended up more like a Don Knotts clown. And even the Prez is dissing him.

However, Nelson is in desperate denial and just can't see it. He is attempting to present his backroom bartering with Harry Reid wherein Nebraska was to receive a special Medicaid funding deal (a deal which has been scathingly discredited and dropped like a hot potato) as proper politics. But, of course, what it has done is to expose Nelson as a manipulative, secretive, greedy politician...and not a very good one at that. Yet he clings to his tattered dignity as he tells the Washington Times (with a straight face too) that his deal certainly wasn't part of Obama's horse trading remark.

5) And finally, speaking of bad jokes, here's how Senator Nelson's buffoonery is being appreciated outside of Nebraska. The Huffington Post's Sam Stein reports on a bill submitted to the Tennessee General Assembly which would define a lawmaker's trading votes for special favors as criminal bribery. The title of the bill? "The Ben Nelson Act to Ensure Political Integrity."

As I mentioned earlier though, Ben Nelson is in a dull-witted, defiant, denial and he still doesn't get the joke. And he hopes that those high-dollar ads he's now running regularly in Nebraska keep voters from getting the joke too.
Posted by DH at 9:34 AM