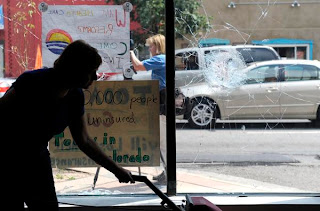 When the windows of the Democrat Party headquarters in Denver were smashed last year during the party's convention, Democrats were quick to scream about Republican hate, racism and dangerous violence. And the media dutifully played up the story from this angle.

The story that the criminal eventually caught and accused of the attacks was actually a transgendered leftist whom Denver Bash Back (a GLBT protest group) proudly calls one of its "friends and comrades," a person who had been paid for working for one Democrat politician (maybe more) -- well, that story has been given much, much less ink.

And, not surprisingly, there have been no apologies for the slander thrown at Republicans by Colorado Democrat leaders.

Well, the goon has finally had his day in court. And it ended up in an awfully nice deal for him too. Maurice Joseph Schwenkler, 24, (known by his buddies in the anarchist movement as Ariel Attack) pleaded guilty yesterday to the vandalism. But though the damage was $11,000 (he took a hammer to 11 plate-glass windows), Schwenkler was only charged with a second-degree misdemeanor. Nothing for hate crime, political intimidation, public endangerment, conspiracy (there was at least one other criminal involved in the action), disturbing the public order, or incitement. The fellow will serve no jail time whatsoever.

In fact, he only has to pay for half of the damage.

Imagine the differences in press coverage and judicial action if the culprit had been found to be a pro-lifer, a member of the NRA or a fan of Sarah Palin.
Posted by DH at 10:11 AM