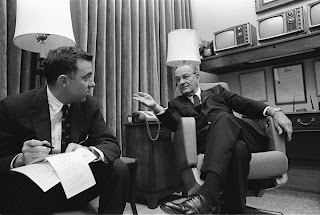 Joseph Califano Jr. wrote a bizarre op/ed piece which was published in the Washington Post this weekend. f you're old enough, you may remember Joseph Califano as the Secretary of Health, Education, and Welfare under Jimmy Carter. If you're as old as me, you remember Califano from his halcyon days when he served as the senior domestic policy aide for LBJ. In those days the New York Times called Califano the "Deputy President for Domestic Affairs."

The reason Califano wrote the article ("Private Conscience, Public Morality") was to criticize Providence Bishop Thomas J. Tobin's decision to deny Rep. Patrick J. Kennedy the Eucharist, which Califano (a renegade Catholic who denies the authority of Catholic teaching but still wants to be in the club) incorrectly calls a "right" of all Catholics.

It's a tired old dodge which has been used by Ted Kennedy's kind of Catholics for years. Califano knows that. And, though he's not below using it himself as an excuse for his un-Catholic opinions, he knows that the Post is going to want something more interesting, something a bit juicier if they're going to print his article.

So he gives it to them in the form of a "weren't we clever" anecdote about how he and LBJ pulled one over on the naive and cowardly Catholic prelates back in the 1960s.

I saw this when I served as chief domestic adviser for President Lyndon Johnson and as secretary of health, education and welfare for President Jimmy Carter. In the 1960s, LBJ became the first president to aggressively promote family planning abroad and at home. Abroad, he refused to send grain to India during a famine until Indira Gandhi committed to a family planning program. At home, he ordered federal agencies to make contraceptives available to the poor. I was the (Catholic) White House aide responsible for enforcing those policies.

Johnson's actions prompted a stinging attack from Catholic bishops, who charged that he was coercing the poor to practice birth control. The president told me to "work something out" with the bishops, who were our needed allies in battling poverty and racial discrimination. At meetings with Father Francis Hurley, the bishops' top Washington staffer, and Detroit Archbishop John Dearden, leader of the American bishops, I assured them that we were offering an option to the poor, not coercing acceptance. We ultimately agreed that if the president phrased his policy in terms of "population control" (which allowed for more food and the church-approved rhythm method of family planning as well as contraception), the bishops would cool their rhetoric. LBJ kept his word, and when he later signed a U.N. declaration supporting population control, the bishops were silent.

Later in the article, Califano predicts that greater government involvement in health care (a good and inescapable thing in his opinion) will necessitate yet more cave-ins by the Church.

As government moves to influence funding for most health services, it will become the political battleground for a host of thorny ethical, moral and religious issues: psycho/neurosurgery, sterilization, abortion, test-tube fertilization, genetics, use of tax dollars for extraordinary life-extending procedures, the rights of terminally ill patients to try any and every cure -- or choose none. These issues cannot be resolved simply by a jerk -- or bend -- of the knee.

Knowing that Califano's (to stay with his metaphor) weak-kneed brand of Catholicism is the only one allowed to have a say in modern Democrat politics creates a very tragic and frightening state of affairs. And unless the Catholic Church begins to act as if uncompromising opposition to abortion, euthanasia, embryonic stem cell experimentation, cloning, immoral sex education, and anti-natal population planning are critical elements of true Christianity, Joe Califano's snickering dismissal of the Church's relevance will become a settled fact.
Posted by DH at 7:00 AM