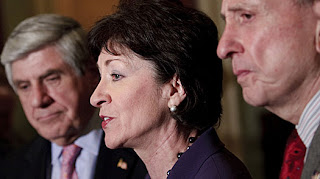 Democrat Senator Ben Nelson will introduce a 30-second TV commercial during the Nebraska/Arizona football game tonight in which he defends his vote for the Obama/Reid "health care" bill. The spot will then run on other Nebraska TV stations for at least a few days.

He's doing this in an effort to keep his reputation from falling even farther than it already has.

The spot is only 30-seconds because the Senator has no substantial basis for his support of the bill nor any reasonable arguments for so cravenly forsaking his pro-life principles and concerns for the Constitution. Therefore, his ad is a quick, folksy appearance in which he can mouth a few generalities and not have to explain further his catastrophic cave-in.

So how should Nebraskans respond to Nelson's little ploy? Simple.

1) Keep doing what you've been doing; namely, calling, writing and e-mailing the Senator and expressing your opinions about this and the many other budget-busting, boneheaded, boondoggle Democrat bills he has supported.

2) Follow up by sending similar letters to editors. Keep the dissonance public. And realize that with the left-leaning bias of the press (yes, even here in Nebraska), there will have to be a large and steady stream of such letters to insure that a few are actually published.

And finally 3) Make it clear to family and friends that this is what happens when you vote Democrats into office. For no matter what they claim when back home, their "conservative" or "moderate" positions melt when they get to Washington and they end up toeing the party line.

And the line of the modern Democrat Party (led by the likes of Obama, Reid, Pelosi, Baucus, Rangel, Boxer, Clinton, and Franken) is marked by an aggressive support of abortion and embryonic stem cell experimentation, an expansion of the homosexual agenda, intolerance of Christianity, antagonism to freedoms of speech and assembly when they involve conservatives, an expansion of the welfare state, support of judicial activism, a dedication to an ever-burgeoning government spending spree (except for national defense), ongoing assaults on the free market, and so on.

So, turn Ben Nelson's greedy, perfidious ways with this misnamed "health care reform" bill into an opportunity to educate your fellow Nebraskans about the dangers unavoidably inherent in voting Democrat these days.
Posted by DH at 8:19 AM