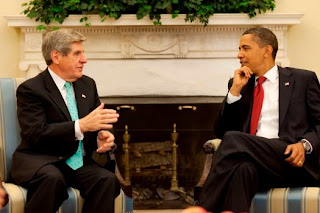 He got his moment in the press spotlight and then did just what we all feared (and some of us suspected), he caved-in completely. There's no way to spin this. He sold out to the radical leftists now running the Democrat Party and now is on board with the most extreme of abortion rights agitators.

Nebraskans must begin working right now to remove Ben Nelson from the Senate at the next opportunity.

This is no compromise. The abortion language is on page 38. It's not Stupak.States can opt out of covering abortions. But abortion in states that don't opt out will be covered by federal dollars (including by taxpayers who oppose abortion).

I'm reminded of the recent Manhattan Declaration this morning. It ends with: "Because we honor justice and the common good, we will not comply with any edict that purports to compel our institutions to participate in abortions, embryo-destructive research, assisted suicide and euthanasia, or any other anti-life act; nor will we bend to any rule purporting to force us to bless immoral sexual partnerships, treat them as marriages or the equivalent, or refrain from proclaiming the truth, as we know it, about morality and immorality and marriage and the family. We will fully and ungrudgingly render to Caesar what is Caesar’s. But under no circumstances will we render to Caesar what is God’s." This language raises some serious questions. I wonder if Bart Stupak has already been on the horn to the Speaker ... the showdown may be the House yet.

Barbara Boxer and Patty Murray declare their support for the current faux compromise:

We said all along that we wanted to ensure there was a firewall between private and public funds - this compromise achieves that. We said we would not accept language that prohibited a woman from using her own private funds for her legal reproductive health care - this compromise meets that test.

And we said we would stop Stupak - which we did. Let's be clear - we were both much happier with the Capps language and the language in the underlying bill. But compromise was necessary to get a health care bill for the American people, and this compromise achieves that.

Jonah Goldberg writes, "Here's what I'm hearing. The deal for Ben Nelson includes additional Medicaid funding for Nebraska and carve outs for physician owned hospitals in Nebraska — and Nebraska only. Uncle Sam will take the hit for 100% of the Medicaid expansion for Nebraska, forever. Nebraska is the only state to get this deal. It profits a man nothing give his soul for the whole world, but for Medicaid funding carve outs..."
Posted by DH at 12:12 PM