"The War on Christmas is Really an Attack on Americans' Independence." 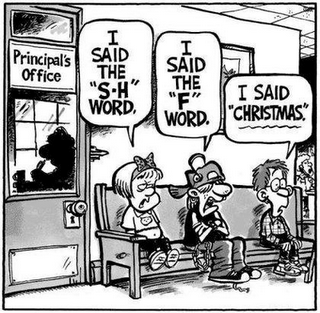 ...Speaking of the true meaning of Christmas, the Boston Herald reported on a Nativity scene in Manchester's public square that was removed by local government officials who merely feared it would invite lawsuits. The state's Bayam Elementary School is debating whether or not to bar Santa Claus, dreidels and any other religious-themed chachka from the school's holiday gift store. One humorless parent defended banning jolly old St. Nick because if the school allows Santas, swastikas would find their way into the classrooms next.

And that, perhaps, is the broader cultural significance of the war on Christmas. In our relativistic age, we're not expected to believe in anything. To politically correct liberals, belief is an odd eccentricity passed down by barbarians who lived in a more superstitious time.

The war on Christmas is really an attack on Americans' independence. We can't do anything anymore without our betters supervising what we drink, drive, eat, smoke or read. Surely we can't be trusted to celebrate on our own, either.

These concluding paragraphs from a Washington Times editorial should prompt you to read the whole thing. For instance, you'll also learn how Best Buy (who carefully avoids offending anyone by letting the word "Christmas" slip into their advertising) nevertheless found space in a newspaper ad to wish their customers a "Happy Eid al-Adha" (refering to the Islamic "festival of sacrifice" that concludes the Hajj). And there's more. Check it out here.

(And if you'd like a bit more about that Best Buy situation, see this.)
Posted by DH at 9:04 AM