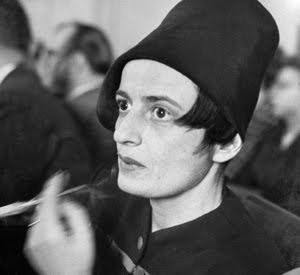 Peter Wehner has some refreshingly honest and perceptive comments (plus tossing in a few from others you'll want to hear like Whittaker Chambers and William F. Buckley) about Ayn Rand, that third-rate novelist and audaciously self-centered "philosopher" who has received way too much applause from members of the conservative movement.

Objectively, Ayn Rand Was a Nut

According to Politico.com, Ayn Rand — the subject of two new biographies, one of which is titled Goddess of the Market: Ayn Rand and the American Right — is “having a mainstream moment,” including among conservatives. (Gov. Mark Sanford of South Carolina wrote a piece in Newsweek on Rand, saying, “This is a very good time for a Rand resurgence. She’s more relevant than ever.”).

I hope the moment passes. Ms. Rand may have been a popular novelist, but her philosophy is deeply problematic and morally indefensible.

Ayn Rand was, of course, the founder of Objectivism – whose ethic, she said in a 1964 interview, holds that “man exists for his own sake, that the pursuit of his own happiness is his highest moral purpose, that he must not sacrifice himself to others, nor sacrifice others to himself.” She has argued that “friendship, family life and human relationships are not primary in a man’s life. A man who places others first, above his own creative work, is an emotional parasite; whereas, if he places his work first, there is no conflict between his work and his enjoyment of human relationships.”

And about Jesus she said: "I do regard the cross as the symbol of the sacrifice of the ideal to the nonideal. Isn’t that what it does mean? Christ, in terms of the Christian philosophy, is the human ideal. He personifies that which men should strive to emulate. Yet, according to the Christian mythology, he died on the cross not for his own sins but for the sins of the nonideal people. In other words, a man of perfect virtue was sacrificed for men who are vicious and who are expected or supposed to accept that sacrifice. If I were a Christian, nothing could make me more indignant than that: the notion of sacrificing the ideal to the nonideal, or virtue to vice. And it is in the name of that symbol that men are asked to sacrifice themselves for their inferiors. That is precisely how the symbolism is used. That is torture."

Many conservatives aren’t aware that it was Whittaker Chambers who, in 1957, reviewed Atlas Shrugged in National Review and read her out of the conservative movement. The most striking feature of the book, Chambers said, was its “dictatorial tone . . . Its shrillness is without reprieve. Its dogmatism is without appeal . . . From almost any page of Atlas Shrugged, a voice can be heard, from painful necessity, commanding: ‘To a gas chamber — go!’”

William F. Buckley Jr. himself wrote about her “desiccated philosophy’s conclusive incompatibility with the conservative’s emphasis on transcendence, intellectual and moral; but also there is the incongruity of tone, that hard, schematic, implacable, unyielding dogmatism that is in itself intrinsically objectionable.”

Yet there are some strands within conservatism that still veer toward Rand and her views of government (“The government should be concerned only with those issues which involve the use of force,” she argued. “This means: the police, the armed services, and the law courts to settle disputes among men. Nothing else.”), and many conservatives identify with her novelistic hero John Galt, who declared, “I swear — by my life and my love of it — that I will never live for the sake of another man, nor ask another man to live for mine.”

But this attitude has very little to do with authentic conservatism, at least the kind embodied by Edmund Burke, Adam Smith (chair of moral philosophy at the University of Glasgow), and James Madison, to name just a few. What Rand was peddling is a brittle, arid, mean, and ultimately hollow philosophy. No society could thrive if its tenets were taken seriously and widely accepted. Ayn Rand may have been an interesting figure and a good (if extremely long-winded) novelist; but her views were pernicious, the antithesis of a humane and proper worldview. And conservatives should say so.
Posted by DH at 11:34 AM