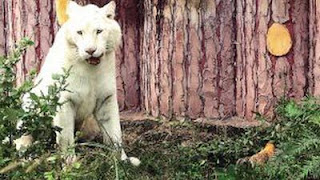 I'll let you decide on the moral of the following story.

The Chongqing Wild Animal Park (China) has five rare adult white tigers which were originally trained to perform tricks for visitors...Keepers have been trying to encourage them to follow their natural instincts by throwing them live chickens - but without success.

Feeder Shi Ruqiang said: They're supposed to be wild and scary, but due to their soft lifestyles and human care they have gradually lost their wild nature. "I have been trying to interest them with live chickens but it was quite a funny scene. The tigers were so scared that they wouldn't go near them. One chicken passed out and the tigers did eventually approach it - but then it woke up again and squawked and they ran for their lives!"

Shi says the keepers are now forcing the tigers to stay outside their cages for at least 12 hours a day to toughen them up.And they are planning to introduce a wild tiger to show the domesticated big cats the ropes. "If all else fails, we will simply cut down their rations until they are so hungry that they are forced to hunt for themselves," he added.
Posted by DH at 11:21 AM