U.S. to Kick In Millions In New Foreign Aid Exclusive to Muslim Nations 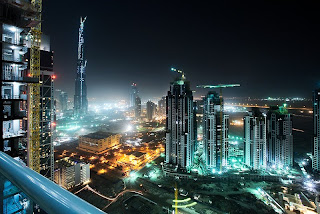 The oil-rich Arab nations build lush palaces and entertainment complexes for their politicians and businessmen. The skyline of Dubai as shown here illustrates that fact.

But they don't bother much with their nation's poor. In fact, they think about the needs of the common people about as much as they do such niggling things as religious tolerance, political freedom, or women's rights.

But, not to worry, here comes Barack Obama with money wheedled out of the pockets of the U.S. taxpayer, that decadent dupe of the Great Satan whom the jihadists have promised to annihilate.

Last Friday the White House Friday announced a new "technology fund" exclusively set aside for Muslim nations. The U.S. will be kicking in, to start with, up to $150 million. Here's more.
Posted by DH at 1:19 PM