This Ain't No Way to Run a Railroad. Or Health Care. 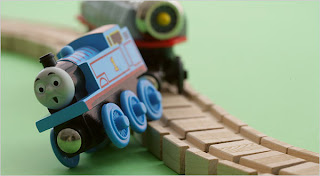 Among the endless things the government needs your money for is to subsidize Amtrak, its nationwide rail network (well, semi-nationwide anyhow). You probably thought that after scaling down of service, the development of new technology, and the price of gasoline which might make travelers consider the train, Amtrak was turning a tidy profit and able to take care of itself.

And the money you paid to keep them going is shocking.

Even in the heavily traveled northeast corridor, Amtrak trains are losing money. The Northeast Regional lost almost $5 per passenger. But that's nothing compared to the Sunset Limited running from San Antonio and Los Angeles. American taxpayers subsidized that route at the rate of $462 per passenger!

And now these guys want to run America's health care system?
Posted by DH at 9:03 AM