One Way to Reduce the Crime Rate? Stop Counting Crimes. 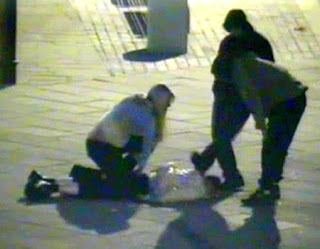 Let's see...how can police reduce the shocking rate of violent crimes in Great Britain, especially given the general cultural erosion and the failure of the justice system?

How's this for a solution? Just stop counting.

A new police study has determined that perhaps as many as 6,000 victims of violence are being ignored by the police as officers simply record incidents as "no crime." Being overworked as they are, policemen considering the paperwork that must be filled out, or the fact that they have little chance to solve the crime, or that the perpetrator (even if caught) will escape punishment and be right back on the streets...end up marking their forms "no crime" and moving on.

Here's more from Metro (where the photo comes from too) and from the Daily Mail.
Posted by DH at 7:26 AM