It was way back in the mid-1980's that I attended a National Association of Evangelicals conference here in Nebraska. In fact, I had a Vital Signs Ministries booth at the event, one of only four or five such booths set up in the back of the room.

Of the 100 or so Christian leaders present for the day long affair, only one signed up for our free newsletter. Only three bothered to even converse with me. The other booths didn't fare much better, except for one very popular one that dealt with special life insurance rates for pastors.

The speakers were also disappointing. Theology wasn't under discussion but technique certainly was. Church growth, for instance, was quite important. Overcoming the complaints of older parishioners to contemporary Christian music made for a whole session. Leadership tips that came from the best of management consultants took up another.

Bible study? Intercessory prayer? Holiness? Engaging the culture in evangelism, discipleship and cultural reform? These things which I had figured would be the stuff of the weekend were treated as afterthoughts, sideline matters. Thus I came away from my first NAE experience a bit jaded and hoping that this "majoring on minors" attitude wasn't symptomatic of the organization as a whole.

However, the years following have only increased my disappointment with the NAE. Indeed, I'm finding myself regularly in outright opposition to their sophomoric flirtations with theological and political liberalism.

Well, Cizik may be gone but I didn't figure he was the problem anyway. After all, the leadership of the NAE was well aware of Cizik's heterodox predilections and cowardice and were yet quite content to leave him in place for all those years.

The organization as a whole had become much too worldly and therefore of little good either in confronting the secular power structure in Washington or in properly shepherding the NAE-member churches and denominations throughout the country.

Without a genuine shakeup in the organization (i.e. repentance, confession, and a consecration to holy living, bold preaching, fervent prayer, and holding tightly to the Bible's teaching on the issues the NAE had already compromised), I feared we were in for yet more revelations of the NAE's cave-in to liberalism and political correctness. 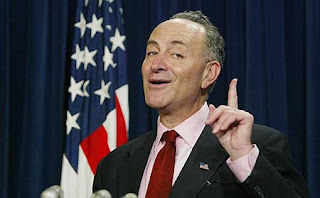 And here's the latest. The NAE's newset resolution (highly praised by the likes of Chuck Schumer as well as Joel Hunter and Bill Hybels) calls for immigration reform along the lines of the failed Comprehensive Immigration Act (CIR) of 2007. Like one might suppose, the resolution is heavy on government action. Of the 7 specific "Calls to Action" in the document, only one deals with the Church. ("That immigrants be treated with respect and mercy by churches.") The rest set out a political agenda for government.

In itself, this resolution may not set off alarms. But I'm afraid it cannot be taken on its own. For it does fit the pattern of recent years in which the NAE follows the paths established by the liberal powers that be. Where, for instance, are the evidences that the NAE is taking seriously the issues of abortion mandates in health care, the intolerance of Christianity, religious freedom abroad, the inculcation of anti-Americanism in tax-supported jihad schools, the President's promises to move forward the homosexual social agenda, the horrendous power play against the citizenry represented by the stimulus spending bill, the tyranny poised by Obama's oligarchy of leftist czars, and any one of a number of other important matters?

Mark Tooley, the President of the Institute on Religion and Democracy, who I refer to with some frequency here on Vital Signs, examines the NAE's latest resolution in the American Spectator. It's a good article and should be read in its entirety but I'll just drop in this excerpt and let Mark make the conclusion.

...In fact, NAE's resolution admits "the Bible does not offer a blueprint for modern legislation." So on what precisely does NAE base its political counsel? It's not clear. As my colleague Alan Wisdom points out, the NAE stance somewhat dismissively refers to "rule of law" and implies potential skeptics of its immigration position are "simplistic." It fails seriously to distinguish between legal and illegal immigrants, and similarly fails to admit the different responsibilities of the state versus the church. NAE also does not distinguish refugees fleeing persecution from other immigrants seeking economic advance.

Coming in the wake of NAE activism on Global Warming and U.S. terror interrogation techniques ("torture"), NAE is now gearing up next to call for nuclear disarmament. NAE's official stances for traditional marriage and sanctity of life seem to be taking a back seat. So how is NAE now substantively distinct from the old, left-leaning National Council of Churches (NCC) for which it was partly founded as a conservative alternative (at least for the NCC's predecessor) more than 60 years ago?

The NCC became mostly irrelevant when its Mainline Protestant voices stopped speaking for its churches and started speaking "prophetically" to them. Similarly, the NCC moved beyond issues of Christian consensus to adopt more morally ambiguous, and ostensibly more fashionable, political causes du jour. This sad history should be familiar to evangelicals. But the NAE seems determined to repeat what has already been tried and failed.
Posted by DH at 11:33 AM