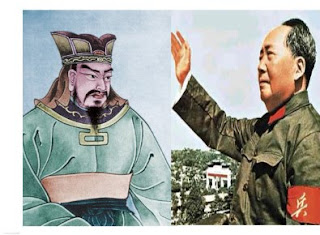 Remember how Anita Dunn's justification for describing Mao Tse-Tung as one of her two favorite philosophers, a figure she often turns to for guidance, was that Republican strategist Lee Atwater also quoted Mao a lot?

Well, not only was that as limp and irrelevant an excuse as you could find, it turns out that it was but another bonehead play for Team Obama's Communications Director.

Because not one example of Atwater quoting Mao can be uncovered.

But he did quote frequently from The Art of War, the famous book ascribed to the ancient Chinese philosopher Sun Tzu. In fact, Atwater supposedly carried a well-used copy of the book around with him.

Mao Tse-Tung? Sun Tzu? The two men held completely contrary philosophies and were separated by more than a thousand years.

But they are both Chinese.

Apparently that was close enough for Anita Dunn.

Where was the media on this one? Had Dunn been a Republican, the pundits and late night comedians would have feasted on this for a month.
Posted by DH at 11:06 AM