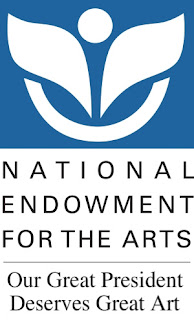 It's not an interesting news story that an independent, supposed to be non-partisan government agency got caught in an "inappropriate" promotion of President Barack Obama's agenda. That happens quite a bit.

It's not an interesting story that the very late response from the White House turned out to be an apology that wasn't really an apology at all but rather the same old "It's everybody else's fault for misunderstanding what we were trying to do" dodge. That too happens every day.

It's not even an interesting story because of the remarkable irony involved; namely, that the National Endowment for the Arts teamed up with a White House official to call for yet more partisan politicization of the nation's artists, particularly those who are awarded huge amounts of tax-payers' money to do their thing. Come to think of it, though; maybe irony isn't the right word here. Corruption, coercion, payola -- they seem to fit better.

But anyhow, that isn't exactly what makes this story novel either.

No, what's most interesting about this story is that it's yet another important news story that was uncovered by the alternative media and covered so well and so effectively that even members of the old guard media felt obliged to finally report on it too.

This then is another important coup for the alternative media of conservative talk radio, bloggers and magazines. It's one more sign that we may be nearing (at last) a tipping point towards a genuinely independent press -- a press that will search out the facts of a story, that will report them fairly and comprehensively, a press that will serve as a watchdog over all political parties, movements and issues.

That would be a coup for the American people.
Posted by DH at 12:57 PM