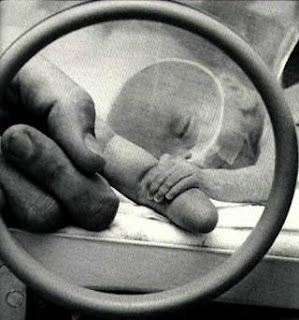 Dr. Prakesh Shah is no pro-lifer. Indeed, he is as pro-abortion as they come, arguing that safer methods of abortion should be found. Well, safer for the mothers, that is; every abortion is lethal to the innocent preborn boy or girl involved.

But what's the deal here? Why does the University of Toronto's Dr. Shah want safer abortion methods?

Because he's just finished his comprehensive review of 37 previous medical studies and determined that induced abortion boosted the odds of the mother experiencing premature birth and/or low weight babies in later pregnancies by 35%!

His findings, published in the British Journal of Obstetrics and Gynaecology, did not surprise the pro-life community (they've been pointing out studies suggesting the link between abortion and subsequent premature births for many years) but Dr. Shah's report has caused an uneasy stir among others because the evidence seems incontrovertible.

After all, for decades now liberals have stridently refused to consider the long-term effects of induced abortion, fearing that doing so would only benefit their opponents in the abortion wars. Better to stick one's head in the sand and remain politically-correct with modern feminism than dare to confront the haunting suspicion that abortion, as undeniably unnatural and violent as it is, may actually endanger women.

But here's proof. Even more embarrassing, it's a review of the large amount of proof that was already out there.

No wonder then that left-wing media like the Guardian are worried that "The review of a large amount of research, carried out in Canada, is likely to be seized on by the anti-abortion lobby as evidence that termination is damaging to future babies." Uh huh; that business of "seizing on" science is a terrible thing, at least when it goes against the grain of a priori liberal ideology on such matters as abortion, homosexuality, or climate change.

The Guardian doesn't want to give ground to pro-lifers yet, even in its wriggling around, it must. "However, the authors say there could be a number of reasons for their findings, of which the most likely is physical damage to the cervix caused by older methods of abortion."

In other words, the newspaper reporter (Sarah Boseley, the newspaper's Health Editor) is telling us to pay no attention to what the anti-abortion lobby seizes on because this preemie/low weight danger isn't about abortion as a sacred and socially popular right; it's only about those yucky details of abortion...methods.

And don't worry, dear readers, the Guardian certainly isn't going to trouble you with those. We must keep the abortion movement separate from the wrenched open cervix, the perils of cutting away the parts of a fetus from its mother, the assault on the womb as well as its contents by an extremely powerful suction apparatus, the inevitable development of scar tissue, the chemical concoctions so paramount that they force the womb to reject (but only sometimes expel) its product -- oh no, we will keep silent about these grisly matters. Our coverage of abortion will orbit around what it always has: slogans, social philosophy and and an "us vs them" perspective.

Light brings wisdom, the ancients taught. It's not always so.

One other note from this story. Dr. Shah (remember, he's not a pro-life advocate) does believe these scientific findings matter enough to let every woman considering an abortion know about the risks. What the Guardian reporter dismissed as "older methods of abortion" are those methods which are still very much in vogue by abortionists everywhere. Therefore, Dr. Shah departs from Planned Parenthood, other abortion agencies and most feminist organizations in that he believes that abortion clients would benefit from a full disclosure of relevant information. "When a woman comes for induced termination of pregnancy, she should be counselled about that risk. At least she will be able to make an informed choice," Shah said.

Informed consent? Golly, that's not going to make Dr. Shah popular with the liberals either. I mean, if you start telling women the truth about the possibility of long term adverse effects of abortion, you're liable to find yourself find telling them about about the risks of the procedure itself.

Honesty? Full disclosure? Goodness me; where would that kind of thing stop? The next thing you know, you'd be telling abortion clients about fetal development, about post-abortion trauma or even about the whole host of compassionate, life-affirming help available to women and their families offered by pregnancy centers and churches. I mean, if you told women these things, don't you realize that far fewer of them would abort their babies?