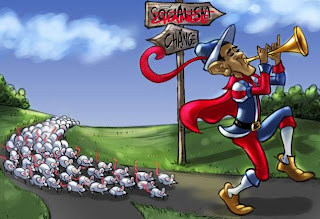 The principal of a New Jersey elementary school where young students were videotaped singing the praises of President Obama is making no apologies for the videotape and says she would allow the performance again if she could, according to parents who spoke with her Thursday night...

King has long been a fan of Obama, hanging pictures of the president in her school's hallways and touting her trip to his inauguration in the school yearbook.

Included in the full-page yearbook spread were Obama campaign slogans ("Yes we can! Yes we did!") and photos King took in Washington on Jan. 20, when she attended the inauguration.

There also were photos taken at the school depicting students doing Obama-themed activities about their "hopes for the future," featuring posters of Obama. According to the yearbook, students watched the inauguration in class...

Not surprisingly, other video clips are surfacing of school kids being exploited by government school staff who adore Barack Obama. How sad. The government schools are doing a lousy job in teaching kids math, science, grammar, and literature but they're aces when it comes to indoctrinating kids in political correctness. (The school in the clip below is probably in the San Francisco area. At least the San Francisco Chronicle shows up in the piece.)

And if you're tempted to think the schools can somehow be excused for extolling Barack Obama's election ("The ground has shifted; the world has changed."), then imagine how the Democrats, the press, the educational establishment, Hollywood, and others would have reacted to Texas school kids being required to singing laudatory songs about the victory of George W. Bush.

Wait -- you say you can't stretch your imagination far enough to envision government school teachers conducting such an exercise? Exactly. You make my point even clearer.