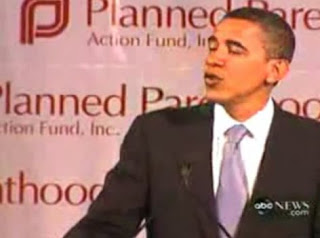 ...Emboldened by the recently demonstrated superficiality of some organs of the news media, President Obama today brazenly misrepresented the abortion-related component of the health care legislation that his congressional allies and staff have crafted. As amended by the House Energy and Commerce Committee on July 30 (the Capps-Waxman Amendment), the bill backed by the White House (H.R. 3200) explicitly authorizes the government plan to cover all elective abortions.

Obama apparently seeks to hide behind a technical distinction between tax funds and government-collected premiums. But these are merely two types of public funds, collected and spent by government agencies. The Obama-backed legislation makes it explicitly clear that no citizen would be allowed to enroll in the government plan unless he or she is willing to give the federal agency an extra amount calculated to cover the cost of all elective abortions -- this would not be optional. The abortionists would bill the federal government and would be paid by the federal government. These are public funds, and this is government funding of abortion...

Read the rest of this important fact sheet from National Right to Life right here.

And about that matter of the President lying about this crucial matter (yet self-righteously insisting that it's his opponents who are the liars), here's an e-mail sent to Kathyrn Jean Lopez and posted by her over at NRO's The Corner.

This particular character flaw was revealed early in the presidential campaign when Obama tried to deny he advocated defeat of the Born Alive Infants Protection Act in Illinois, then accused the NRLC of lying when they pointed it out. (The campaign—but not the candidate—later admitted the NRLC was right, but issued no apology.). It’s a pattern: Those who expose Obama’s lies are branded as liars.