"Obama Has Made the U.S. a Bit Player in Israel" 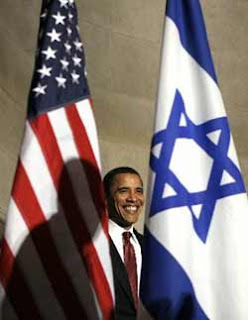 Paul Mirengoff comments on how anti-Obama Isreal is becoming in one of yesterday's Power Line posts...

President Obama's health care policy is in trouble; his Middle East "peace" policy is in shambles. The Washington Post confirms what's been obvious for months -- Obama's insistence on a total settlement freeze has undermined his popularity among Israelis, caused the nation to rally around Prime Minister Netanyahu, and removed the U.S. (at least for now) as a serious force in the so-called peace process.

The magnitude of these "accomplishments" is difficult to overstate. As the Post observes, Israeli leaders have always been reluctant to break publicly with a U.S. president for the very good reason that Israelis pretty much demand that their leaders keep relations with the U.S. on a strong footing. Netanyahu himself was "punished" by Israeli voters when he failed to maintain good relations with President Clinton, the Post recalls.

But the unreasonableness of Obama's demand for a freeze on even "natural growth" construction in core settlements, coupled with his opposition to the building of fewer a relatively small number of apartment units in East Jerusalem, has changed the dynamic drastically. As we have noted, a July poll showed that 60 percent of Israelis don't trust Obama. Meanwhile, according to the Post, Netanyahu's decision to oppose Obama on settlements commands "overwhelming" support...

Obama has done what I thought it was nearly impossible to do -- he has made the United States a bit player in Israel.
Posted by DH at 10:00 AM