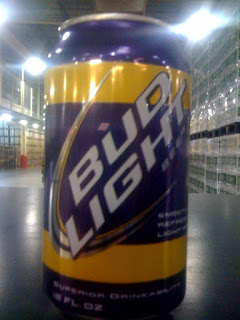 Did Budweiser consider that their new line of "Fan Cans" might lead to more underage drinking? Of course they did.

And they marketed them anyhow.

"Show your true colors with Bud Light. This year, only Bud Light is delivering superior drinkability in 12-ounce cans that were made for gameday."

Will it sell beer? Of course.

Mark Caraway, a member of the Delta Chi fraternity who will be a senior this year, says he's sure the campaign will be a success. "If you put purple and gold on anything, especially for game day, it will sell like crazy," says Mr. Caraway, 21 years old.

And thus responsible people, people who care about teenagers killing themselves by alcohol poisoning and killing others by drunk driving, are ticked off at the brutal callousness shown by Budweiser in its effort to rev up Bud Light sales.

Dozens of colleges are up in arms over a new Anheuser-Busch marketing campaign that features Bud Light beer cans emblazoned with local schools' team colors.

Many college administrators contend that the promotions near college campuses will contribute to underage and binge drinking and give the impression that the colleges are endorsing the brew. Though some schools aren't interfering with the promotion, others are demanding that the sales be stopped. With students returning to campuses and the fall football season approaching, the "Fan Cans" are also renewing the debate over the role of beer makers in encouraging college drinking...

At least 25 schools have formally asked Anheuser-Busch to drop the campaign near their campuses, Mr. Siegal says. In recent letters, the University of Michigan's lawyers threatened legal action for alleged trademark infringement, demanding that Anheuser-Busch not sell the "maize and blue" cans in the "entire state." The University of Colorado, Oklahoma State University, Texas A&M University and Boston College have also told the company to stop distribution near their campuses, citing trademark issues and concern about student alcohol use.

Of course, you don't have to be a college president to let Budweiser know that you oppose this kind of reckless greed.

You can also e-mail Budweiser by going through their website (which, ironically, requires your promise to be 21 or older).
Posted by DH at 8:59 AM