$1.2 Billion and Jerry Jones Still Can't Get the Specs Right 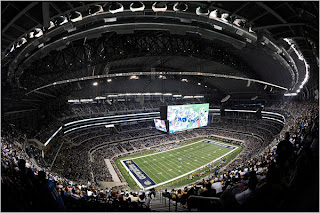 You've got to laugh.

A) Jerry Jones cons Texas into building a $1.2 billion stadium -- that's right $1.2 billion. B) The price includes incredibly gauche 2,100-inch TV screens that hang from the rafters and dwarf the action on the field. (Didn't fans use to come to the stadium to watch the game live and in person rather than on TV?) C) The contractors hang the screens way too low, not only providing a maddening distraction for both players and fans, but actually so low as to be hit by high-flying punts. D) Sure enough, in the opening game played in the stadium, a punter embarrasses Jones and the whole expensive debacle by bouncing a football off the screen.

And does Jones apologize for the remarkably inept scoreboard design which required the play to done again -- something that will continue to occur unless he fixes the problem? Does he at least chuckle at the irony and promise to get those screens raised ASAP?

No, not Jerry. He gets mad at the punter instead!

...Jerry pointed out that his $1.2 billion stadium was built to league specifications. He wouldn't even entertain the possibility of cranking the electronic monstrosity that holds the 60-yard big screens up a few feet. "That's not the point," Jerry said. "How high is high if somebody just wants to sit there and kick straight up?"

Trapasso disagreed, saying that he'd consider the scoreboard a big issue if he had to kick here every week. "It's nothing that is going to happen every time, but it's there and it's got to be addressed," Trapasso said. "I don't know how much further up it can go, but it's in the way."
Posted by DH at 11:10 AM