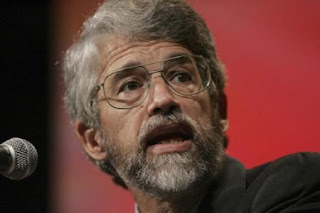 Let's face it. John P. Holdren, the director of the White House Office of Science and Technology Policy, is a nutcase.

Whether evidenced by his "old ideas" about compulsory sterilization and abortion laws being necessary to save the planet from overpopulation or his "new ideas" like jetting pollution particles into the upper atmosphere to reflect the sun's rays and thus save the planet from global warming, the guy is dangerously bizarre.

Here's more from his "old ideas" file; namely, passages from the book he co-authored with the population-panicked Paul Ehrlich, Human Ecology: Problems and Solutions.

“To a biologist the question of when life begins for a human child is almost meaningless, since life is continuous and has been since it first began on Earth several billion years ago,” wrote the Ehrlichs and Holdren. “The precursors of the egg and sperm cells that create the next generation have been present in the parents from the time they were embryos themselves. To most biologists, an embryo (unborn child during the first two or three months of development) or a fetus is no more a complete human being than a blueprint is a building. The fetus, given the opportunity to develop properly before birth, and given the essential early socializing experiences and sufficient nourishing food during the crucial early years after birth, will ultimately develop into a human being. Where any of these essential elements is lacking, the resultant individual will be deficient in some respect.”...

“Those who oppose abortion often raise the argument that a decision is being made for an unborn person who ‘has no say,’” write the authors. “But unthinking actions of the very same people help to commit future unheard generations to misery and early death on an overcrowded planet.”... “The third approach to population control is that of involuntary fertility control. “Several coercive proposals deserve discussion mainly because societies may ultimately have to resort to them unless current trends in birth rates are rapidly reversed by other means.”

“Compulsory control of family size is an unpalatable idea, but the alternatives may be much more horrifying. As those alternatives become clearer to an increasing number of people in the 1970s, we may well find them demanding such control. A far better choice, in our view, is to begin now with milder methods of influencing family size preferences, while ensuring that the means of birth control, including abortion and sterilization, are accessible to every human being on Earth within the shortest possible time. If effective action is taken promptly, perhaps the need for involuntary or repressive measures can be averted.”
Posted by DH at 8:50 AM