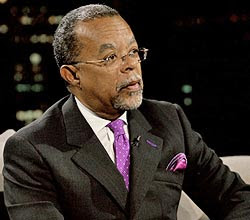 You think this guy's got some issues?

Henry Louis Gates, when applying to Yale University, wrote the following: "As always, whitey now sits in judgment of me, preparing to cast my fate. It is your decision either to let me blow with the wind as a nonentity or to encourage the development of self. Allow me to prove myself."

You would have thought that Gates' attitudes might have softened a bit when he discovered years later that he was "57% white" but his temper tantrum thrown towards a police officer last week suggests little maturation has occurred.

W. R. Wansley has written an illuminating essay on this matter for American Thinker entitled "Impersonating a Victim." I print excerpts below.

This past March 29th, Professor Henry Louis Gates was being interviewed in front of a small group by Walter Isaacson on C-SPAN's Book TV. Thirty-three minutes into the discussion about his new book on Lincoln, Professor Gates began a detailed account of his own genealogy. He said that in doing so he had discovered he was about "50% white". He said that this was quote, "To my astonishment and horror...".

He continued by saying that he had subsequently sent his DNA off to be tested. This time, upon finding out he was "57% white", he said again, "to my horror .... I was becoming more white by the minute". To this Gates, Isaacson and everyone else there chuckled.

Something tells me that if Mr. Isaacson had said that he also had sent his DNA off and found that to his "astonishment and horror" he was 57% black, no one would chuckle, least of all the Professor of African American Studies at Harvard, Dr. Gates...

The Gates arrest fiasco has put into sharp focus the difference between class and race in America. It has also contrasted the pseudo victimhood of Gates with the legitimate victims of Jim Crow. His defenders try playing the tattered race card but it doesn't work this time. "Black men are arrested in greater proportion than whites", they squawk. If Gates is indicative, now we know why.

We have now all heard the verbal abuse Gates hurled at the officer -- who was called to protect his property. Gates theatrical reaction to the situation: "This is what happens to a black man in America!" What? Returning to your posh residence from your trip to China and having a neighbor look out for you by reporting suspicious behavior in your upper-crusty neighborhood and having a white public servant come check on your place for you -- is that what "happens" to you in America, Dr. Gates? Swing low sweet chariot.

Immune to embarrassment he continues undaunted. When he is asked by the officer to step outside, Gates articulately replies, "I'll step outside with yo'-mama!" The words of his repartee ring hollow -- even pathetic. And funny too -- but alas I am laughing at him not with him. What a joke.

Until now I have thought highly of Dr. Gates. Regrettably he has been unmasked as another successful black man unable to come to terms with a country that has given him so much, but he is required to hate as part of the milk-the-guilt charade. He now reminds me of Jeremiah Wright, a man who lives in a million dollar mansion in a gated community where he continually smolders with hatred for the country that has "persecuted" him so.

The President, Gates and Wright: three conspicuously successful black Americans irritably fixated on race. Perhaps Wright is dealing with some of these same white genealogy issues as Gates and the President -- pray tell?
Posted by DH at 12:07 PM