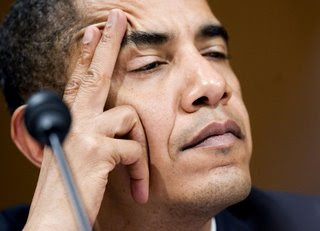 Haven't they fixed that teleprompter yet?

Obama's dull demeanor and ineffective argument made for lousy TV...and even lousier politics. No wonder the TV execs are getting tired of the President preempting their prime time hours.

Obama's bad showing was despite the regular press compliance which, as usual, tried to help him out. For instance, Obama said he wanted to talk about health care and the media went dutifully along -- all but two of the softball questions in his TV hour were fixed on that topic.

The president’s remarks on his chosen subject, health care, were cautious and choreographed, hemmed in on one side by the calculations of his professional wordsmiths, on the other by the delicacy of negotiations with two houses of Congress.

He never detailed his own plan or named a single victim of America’s broken system, and he spoke largely in the abstractions of blue pills, red pills and legislative processes. It’s not easy to turn delivery system reform into a rallying cry for change, but at times, it was as if Obama wasn’t even trying...
Posted by DH at 9:25 AM