Barack Isn't a Doctor; He Just Plays One on TV 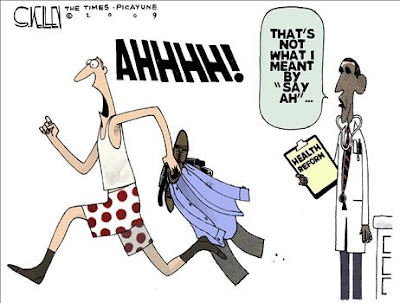 From today's edition of FishWrangler comes a spot-on description of just how badly President Obama is selling his health care plan. (I've put in bold print some particularly useful lines.)

The cartoon is by Steve Kelley.

For many years now Americans have had to become more informed consumers of health care. It is more difficult to get insurance companies to pay for treatment so people do more research to find out which tests, treatments and medications are necessary. With the wide dispersion of the internet it has become easier to do the necessary research. This might not be such a good thing for Barack Obama’s health care goals.

By now many Americans know that they might need to take some personal responsibility to see that test results move with them from doctor to doctor. They know that doesn’t have to be the “big problem” that Obama tries to paint it as. I would imagine that millions of Americans are sitting there thinking, “I know how to keep that from happening. I have actually done it for my son. This guy wants to oversee a total overhaul of the system and he doesn’t even know as much about seeing doctors as I do. No thanks.”

People who have researched medications for themselves or loved ones know that the difference is often much more complicated than the president’s example of two pills that are equally effective and differ only in price. People do not lose time or sleep over such questions. The real difficulty comes when an insurance company has decreed that there is only one medication that is acceptable in a situation when the doctor and the informed patient know there is a more expensive medication that is well known to be more effective. Obama either doesn’t know that such circumstances arise or he wants to act like they do not exist. There are a lot of people out here that know better. And Obama’s blatant parading of his ignorance for all to see cannot be increasing the level of trust.

And does he have to keep reminding me how much better his insurance is than mine? That’s just going to remind me that he has lacked motivation to become a more informed health care consumer.
Posted by DH at 10:52 AM